Will demand for walnuts grow to match supply and competition?

Global walnut production and exports will set records during 2020/21, impacting the US market as it relies heavily on exports. US production is at record levels but will likely remain in check due to lack of price incentives. This report provides production and price estimates for the next five years.

More than 80% of 2020/21 global walnut production will come from three countries: China, the US, and Chile, with shares of 45%, 31%, and 7%, respectively. Other walnut producers are the EU, Ukraine, Turkey, India, and Australia. 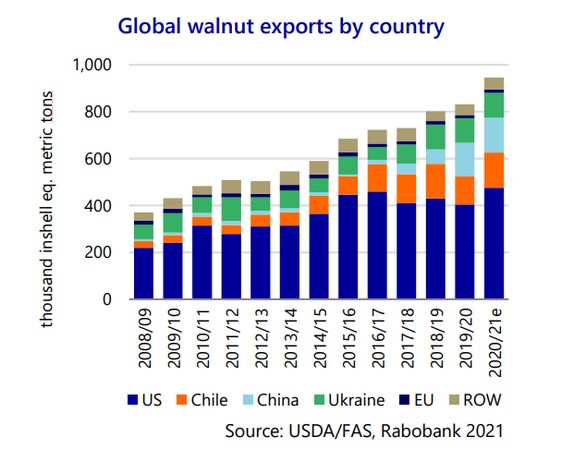 Production out of the US and Chile is expected to grow about 20% YOY, setting new records, while production in China has recovered after a 15% drop in 2018/19. Higher global production will build increased international competition in the export market.

Global walnut exports are projected to grow about 14% YOY during 2020/21, with exports out of the US expected to grow about 18% YOY and exports from Chile growing roughly 25% YOY. The US and Chile were the largest walnut exporters during the last few years. But the fast growth of exports from China, which is rapidly capturing market share, has been disruptive to the market and has surprised some analysts. China is now competing for second place as a walnut-exporting country.