“The spot market volumes are low for all varieties”

The evaluation of the stocks currently on the market remains an essential element to apprehend the evolution of the markets. For the 24th year in a row, a survey is conducted by Fiwap, Carah and Inagro/PCA among 208 Belgian potato producers. In Wallonia, 83 farmers have accepted to participate in the survey, with a representative proportion of the surface areas for each province (Brabant: 12 farmers; Liège: 8; Namur: 11; Hainaut: 52). In Flanders, 125 ware potato producers were contacted for the survey.

In Belgium: when combining the regional results, the Belgian situation appears as follows: 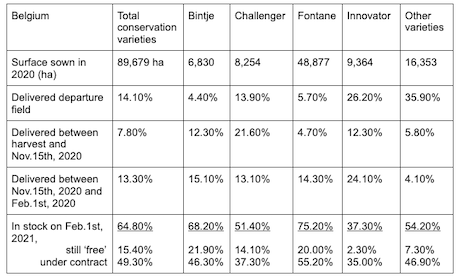 Bintje: marketing of the Bintje has been especially slow since mid-November, with only 15% of the initial production cleared during this period (compared to 20 to 37% in recent years). Bintje now only occupies a niche market essentially based on fresh french fries, with the main outlets (french fry shops, events, collective catering, restaurants) still being blocked by the lockdown. About a third of the stocks are free, compared to 35 to 60% in recent years.

Fontane: only 13% of the initial harvest have been cleared between November 15th and the beginning of February. Fontane is clearly being saved for the second half of the season. The uncertainties regarding germination control without CIPC is leading buyers to favor the long-term storage of the most reliable varieties (Fontane and Challenger). Less than a fourth of the Fontane stocks still remain to be sold.

Challenger: in proportion of initial harvest, the current stocks (51%) are quite high. Removal since mid-November has been weak (13%). The proportion of free stocks (less than 30%) is also slightly lower than in most recent years.

Innovator: the current stocks are particularly low (37% of initial production), due to the initial yield penalized by the drought. Like in February 2019, there is almost no free Innovator left in the Belgian warehouses (less than 10% of the stock).

Other conservation varieties: mostly Markies, Lady Anna, Royal for fries, and Lady Claire and VR808 for crisps. Very little removal since the end of November for the varieties which had been intensively sold, from the fields. On February 1st, their stocks were rather low (54% of initial production), with very little free (less than 15% of stock). A situation very similar to February 2019.

According to the Fiwap/PCA estimates based on regional PAC figures, the surface areas of ware potatoes were up by 1% (less than 800 ha). The average yield is estimated at 45.1 t/ha, higher in Flanders (46/1 t/ha) than in Wallonia (42/6 t/ha). The total Belgian production was therefore 4.05 million tons (excluding early potatoes).

According to the survey, there were approximately 2.62 million tons of ware potato varieties in the Belgian warehouses at the beginning of February, including more than 60% of Fontane, less than 10% in each of the other 3 main varieties (Bintje, Challenger and Innovator), and approximately 15% for all the other varieties.

The total stocks are higher than in all recent years except for February 2018 (excess 2017 harvest). 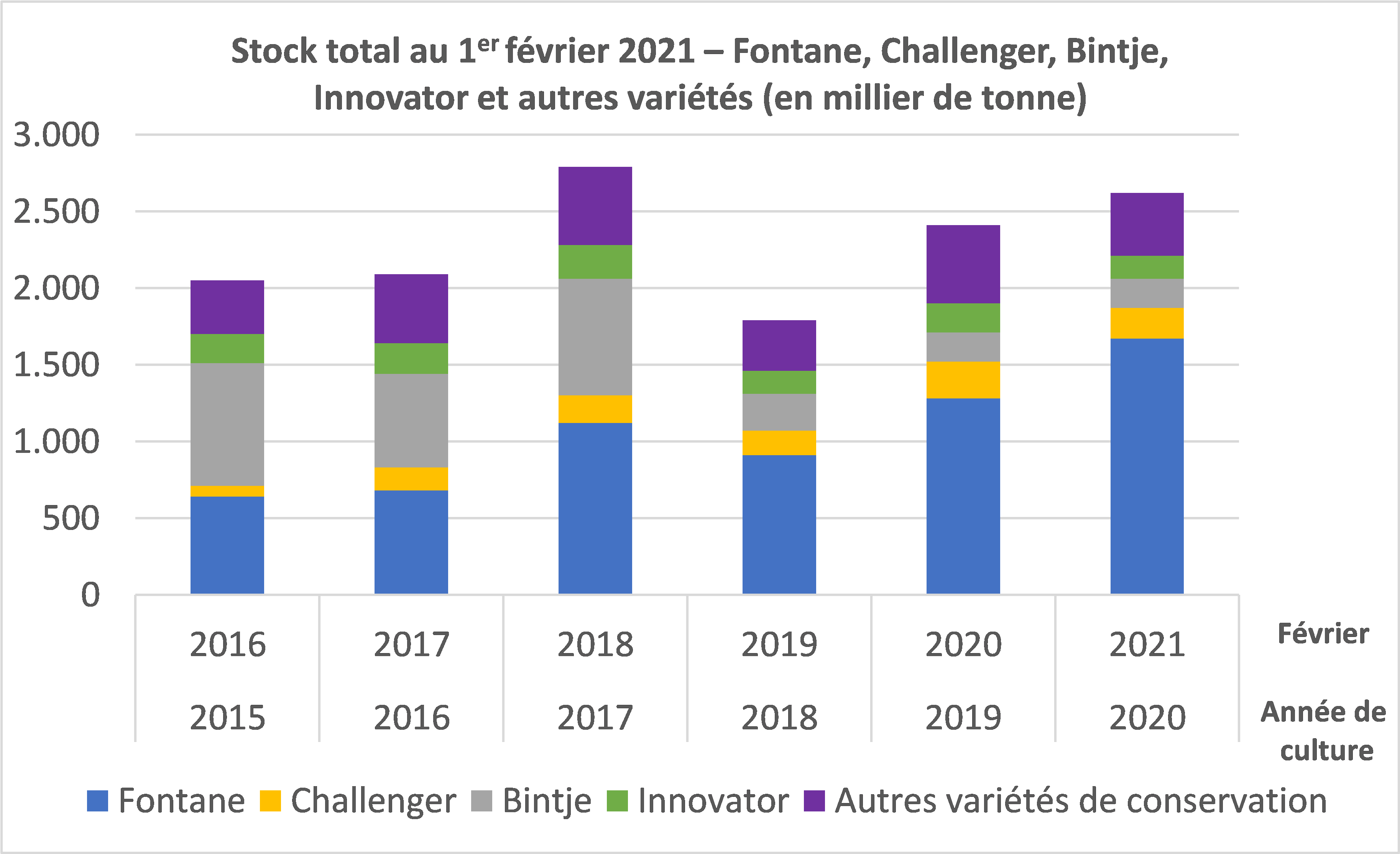 The contracted volumes reach 2 million tons, higher than in all recent years.

Bintje: the stocks of Bintje are comparable to last year (+/- 190,000 tons), but with fewer free volumes (only 60,000 tons). The initial production already had more contracts. The time period from mid-November to early February only cleared 40,000 tons, half in free and half contracted. The lockdown clearly blocks the fresh fry markets. 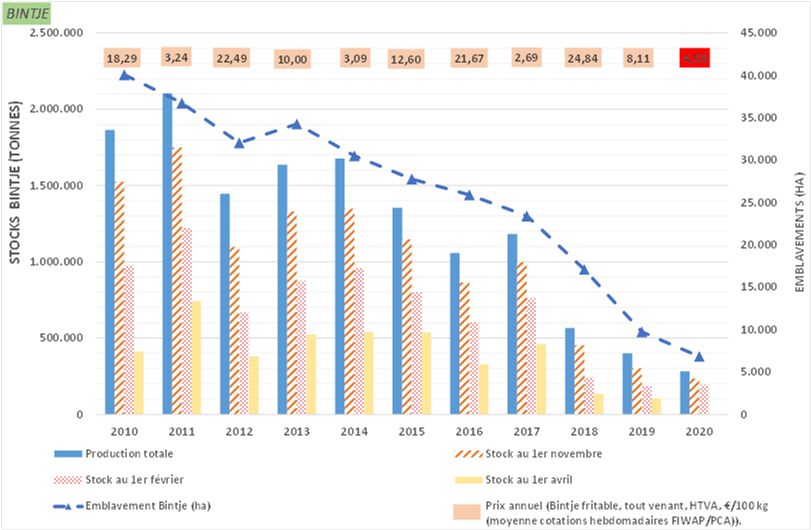 Challenger: with 200,000 tons estimated, the stocks are in the average of the past 3 years, but with very few free volumes (about 50,000 tons). According to the survey, most of the valuing for Challenger took place at the field, while removals since mid-November have only made up 50,000 tons. The figures for Challenger have not evolved much in recent years. 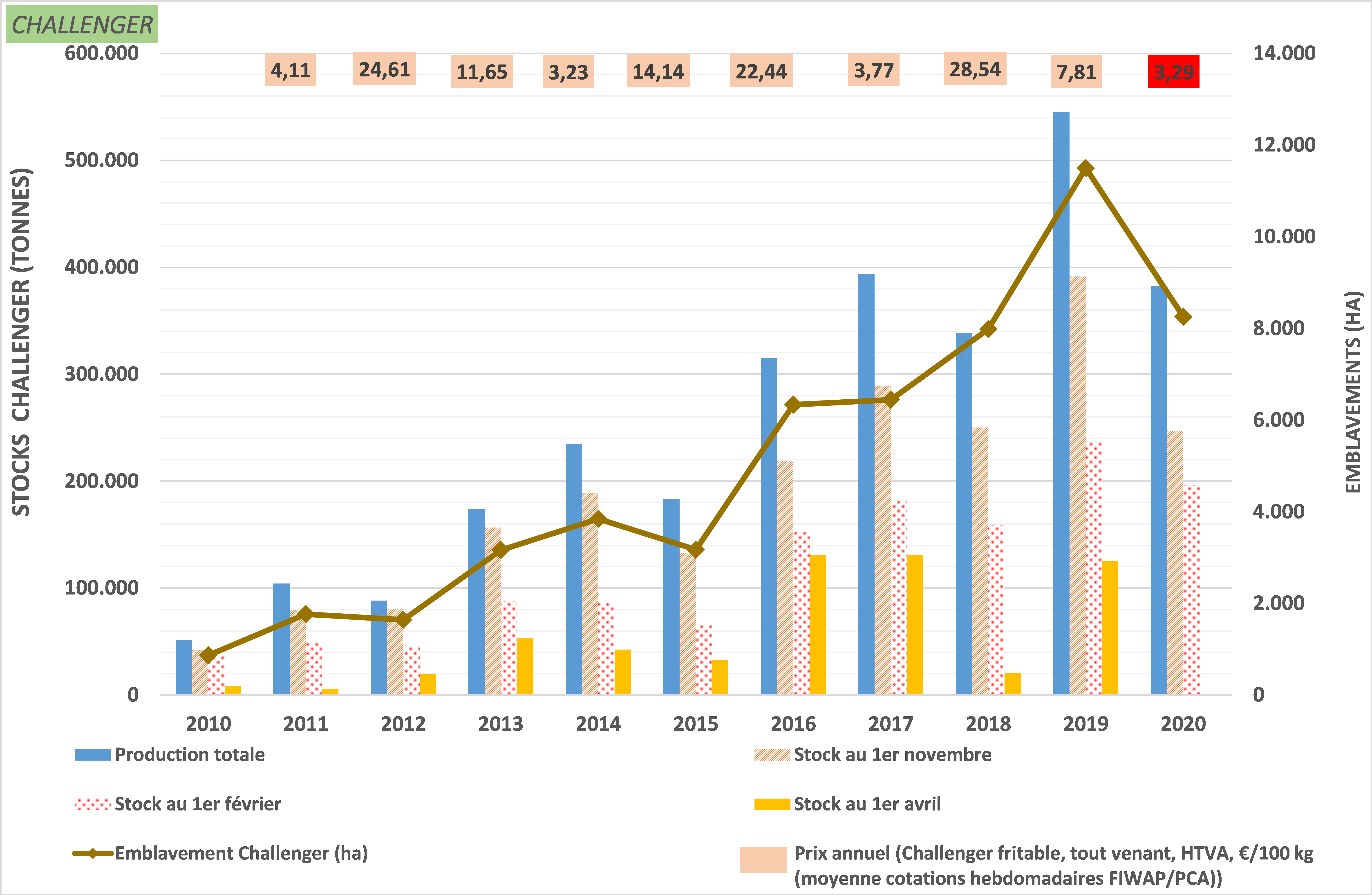 Fontane: 1,680,000 t estimated at the beginning of February, which represents nearly two thirds of the Belgian stocks. Most of the Fontane stocks are contracted (1,230,000 tons, which is twice the average of the past 5 years). Fontane is THE ultimate variety for late delivery contracts. Only 450,000 free tons left, comparable to last year (460,000 tons). The time period between mid-November and February cleared 320,000 t of Fontane, which is more than last year (270,000 tons), and comparable to the previous 2 years. 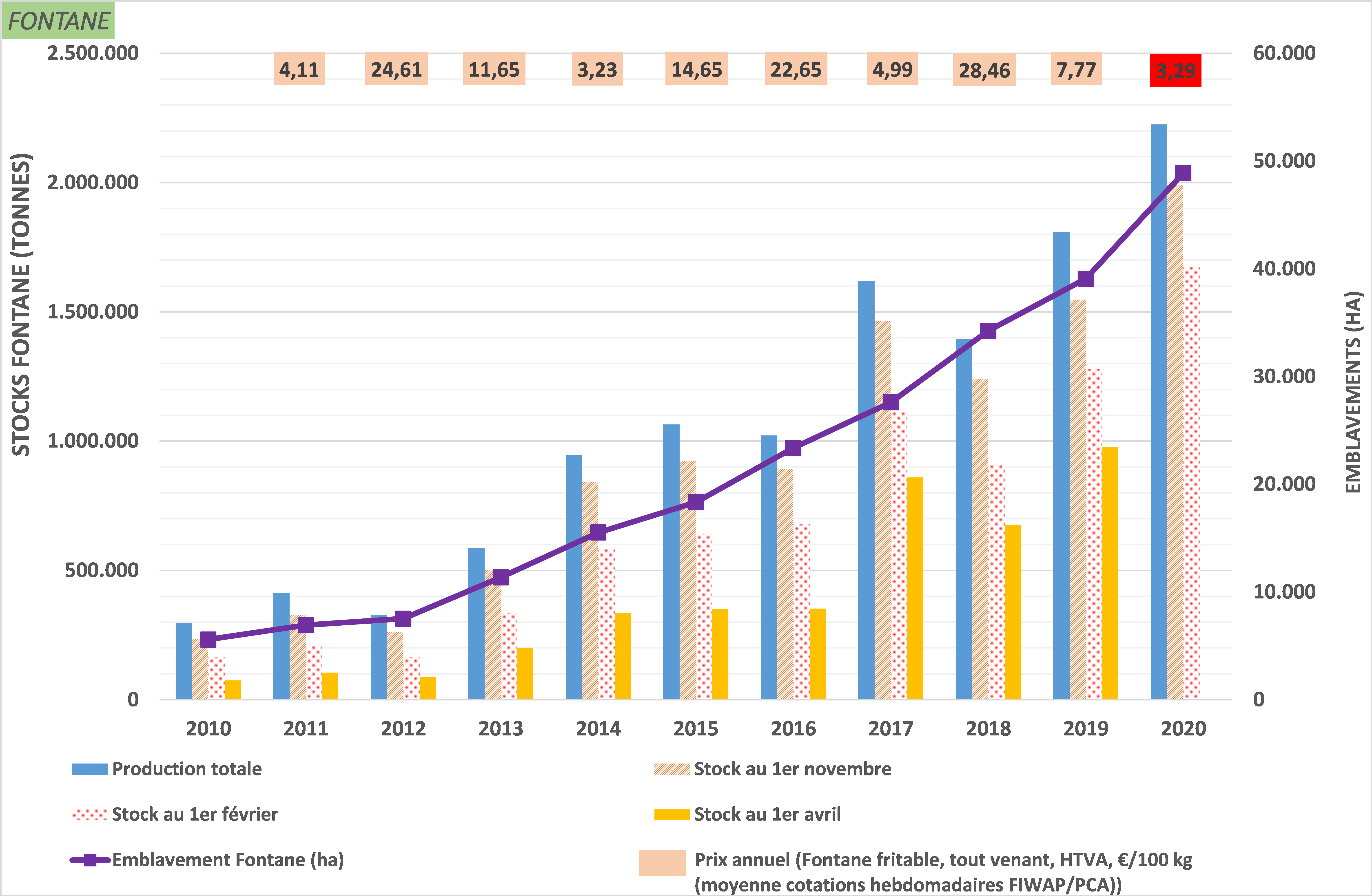 Innovator: the survey estimates the Innovator stocks at 150,000 tons, which is less than the average of the past 3 years (190,000 tons). Nearly the entire stock is contracted. Since mid-November, the markets have cleared 100,000 tons of Innovator, half as much as last year. However, removals at the fields were very high. 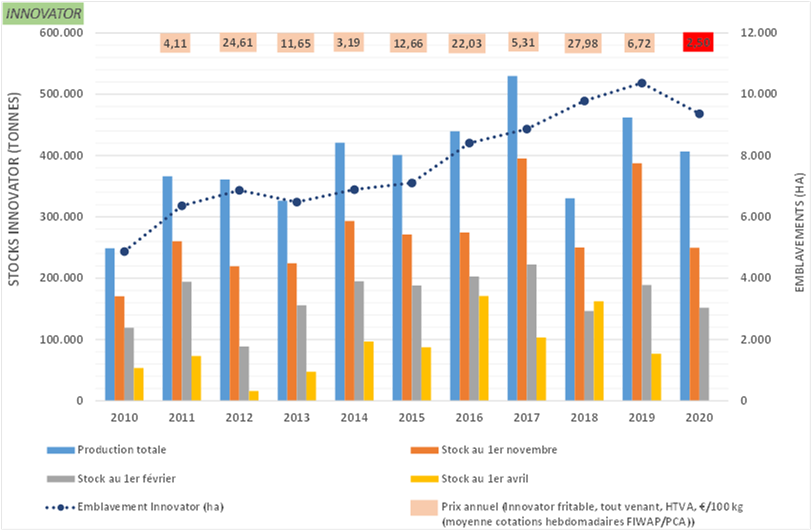 Other conservation varieties: 410,000 tons estimated on February 1st, which represents 15% of the total Belgian stock. Their total stock is lower than in recent years, and mostly contracted (350,000 tons). The free stock is about 50,000 tons. Only 30,000 tons removed since mid-November. 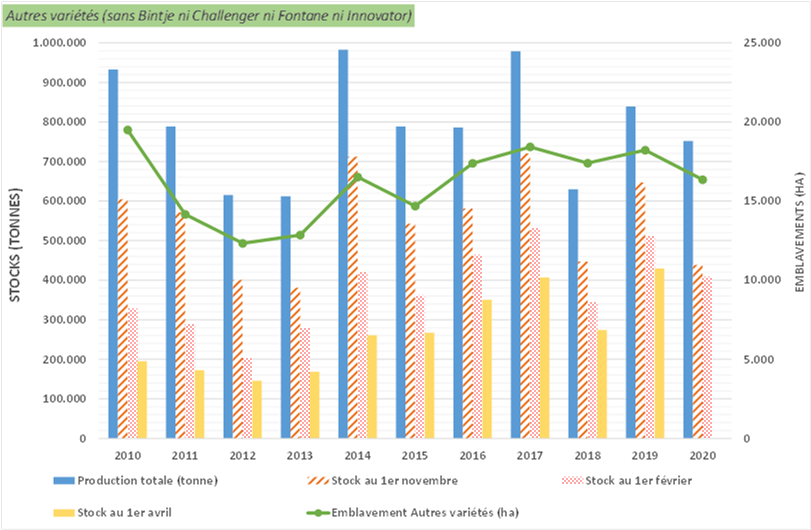 The survey on February 1st shows significant Belgian stocks, but more contracts than in recent years. No major delays reported in the removal of contracts, which is rather reassuring for the smooth running of the season. The free volumes are (very) low for all varieties, which leaves real prospects for the free market, especially if the needs were to last until late (when will we plant the early potatoes whose surfaces will be in sharp decline?). Fontane largely dominates the stocks, while Bintje, Challenger and Innovator only occupy negligible places. Removals since mid-November have clearly been slowed down by the Covid-19 crisis, but the season is not over yet as confirmed by the current revival of activity and prices on the free markets. We must also take into account the uncertainties regarding germination control for the end of the season without CIPC which could disrupt the balance between supply and demand. 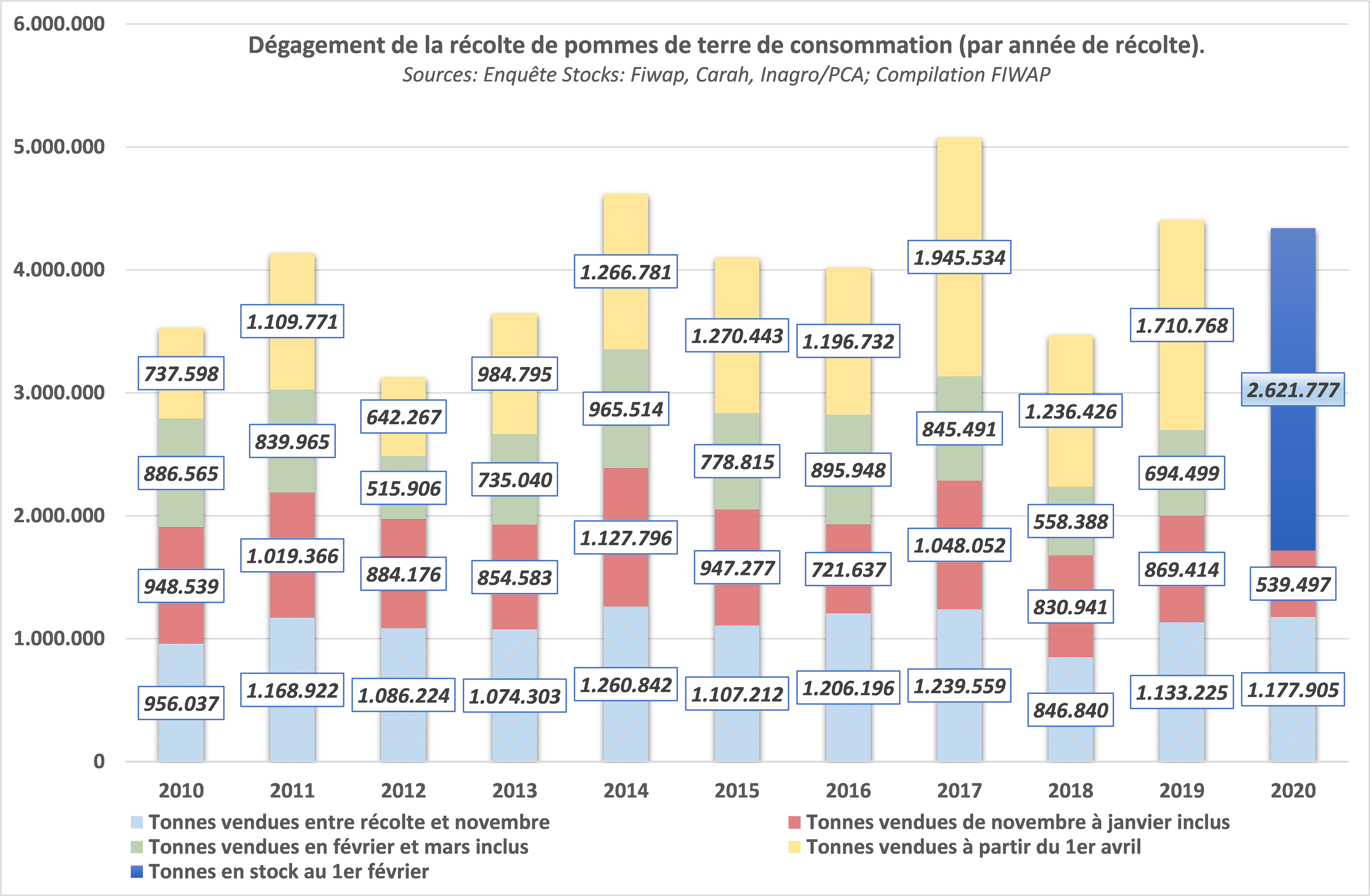 The next survey of the stocks is expected at the beginning of April 2021. The Fiwap team.