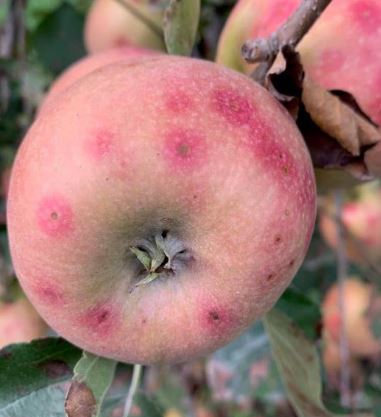 n late summer 2019, a severe outbreak of fruit rot was observed in commercial ‘Pink Lady’ apple orchards (>20 ha in total) in the region Emilia-Romagna (Northern Italy). The symptoms on the fruit appeared as small circular red to brown lesions. Disease incidence resulted over 50% of the fruits.

To isolate the causal agent,  affected apples were collected and small portions of fruit flesh were excised from the lesion margin and placed on potato dextrose agar (PDA). The pathogen isolation, morphological identification and DNA sequencing were performed by scientists at the Wageningen University.

The plates were incubated at 20°C in the dark, and pure cultures were obtained by transferring hyphal tips on PDA. The cultures showed light to dark gray, cottony mycelium, with the underside of the culture being brownish and becoming black with age. Conidia were cylindrical, aseptate, hyaline, rounded at both ends, and 12.5 to 20.0 × 5.0 to 7.5 μm.

"The morphological characteristics were consistent with descriptions of Colletotrichum species of the C. gloeosporioides species complex, including C. fructicola. Two representative isolates (PinkL2 & PinkL3) from different apples were identified by multi-locus gene sequencing. Furthermore, genomic DNA was extracted and the molecular sequencing confirmed the identity of these isolates as C. fructicola. The same results were obtained by patogenicity test", the scientists explain.

Colletotrichum fructicola, belonging to C. gloeosporioides species complex, is known to cause bitter rot of apple in the USA, Korea, Brazil, and Uruguay. There is only one report of bitter rot associated with C. fructicola on apple in Europe (on 2019 in France). However, C. fructicola is also the potential agent of Glomerella leaf spot (GLS) of apple.

"This is the first report of C. fructicola on apples in Italy. It is important to stress that the C. gloeosporioides species complex is still being resolved and new species on apple continue to be identified, e.g. C. chrysophilum that is very closely related to C. fructicola as reported in a study of 2020. GiAven the risks of this pathogen the presence of C. fructicola in European apple orchards should be assessed and management strategies should be developed," the scientists conclude.