Citrus greening disease is not harmful to humans, but is fatal to citrus trees within three to five years. Leaves on infected trees become mottled and misshapen. Their fruit doesn’t ripen properly and is green and misshapen, with a bitter taste. “It’s the biggest threat to citrus in the entire world,” said Ruben Arroyo, agricultural commissioner for the Riverside County. “Every citrus-growing region in the world has HLB.”

Pe.com reports that, to prevent the disease from devastating commercial citrus groves, a citrus plant quarantine was established in parts of Los Angeles, Orange, Riverside and San Bernardino counties. Citrus greening disease has been found in all four counties. 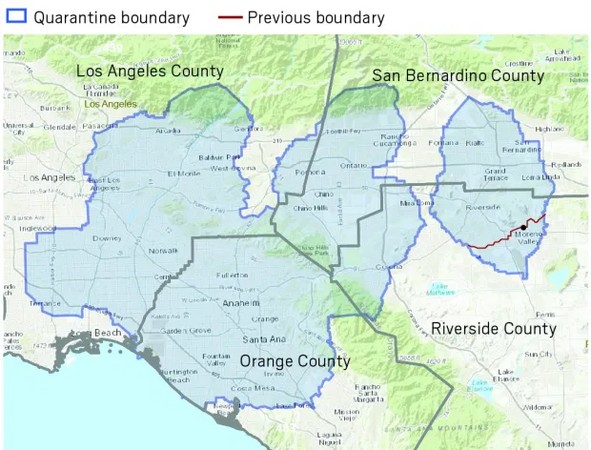 It was just discovered in a lemon tree in Moreno Valley, about a mile outside the previous quarantine boundaries, according to Arroyo. The quarantine zone has now expanded to cover more parts of Riverside, Woodcrest and, for the first time, Perris. There are a total of 225 square miles quarantined.

Wctv.tv has reported that North Florida farmers are keeping an eye on their colleagues to the south as Citrus Greening is running rampant through their citrus groves. While it’s not significantly impacting farms in the Big Bend and South Georgia, farmers are keeping a lookout for the disease. The farmers monitor groves for the citrus psyllid a way to stop the spread. The citrus psyllid can travel with the wind, even migrating by hiding in people’s cars and on clothes.