The harvest of organic Nadorcott mandarins has already started in Spain, with very good prospects for this new commercial season that has just started.

“Fortunately, we have escaped the cold. The fruit is in perfect condition and we are already prepared to serve our customers throughout the month of February, March and until the end of April,” says Fran Sanchís, commercial director of Citruslandia.

The Valencian company, which will celebrate its 25th anniversary in April, has always been devoted to organic farming, and organic mandarins are one of its most important products, says Fran. “From the first Basol to the last Orri, we grow and sell about 5,000 tons. As for the organic Nadorcott, we have just started harvesting at our farm in Huelva, where we plan to obtain around 1,000 tons. This year, we expect to harvest close to 1,600 tons of organic Nadorcott from our plantations in Valencia and Huelva. We also have about 200 tons of Orri, which are allocated to the most gourmet-oriented customers looking for something very exclusive. 80% of the mandarins and clementines that we sell are of our own production, but we also work with the fruit of some associated growers.”

Unlike the first mandarin varieties of the 2020/21 campaign, of which there were many small sizes, the organic Nadorcott from Citruslandia has “a perfect commercial size,” says the company's commercial director. These combine their organic character with the added value of their club fruit status. 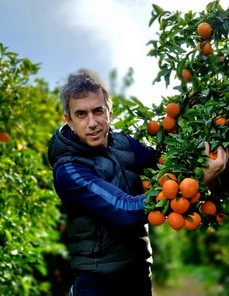 "Between the first part of the campaign and the second there has been a drastic price increase. The Nadorcott has started with higher prices than those recorded at this time last season. Our main objective is to offer our customers a quality product. We are not the cheapest on the market, but we are among the best in terms of quality. We do not consider working with varieties, tree patterns or growing areas that do not deliver flavor," says the commercial director of this company.

Since its creation in the 90's, the company has been allocating its organic production to Europe, especially the United Kingdom. “At the beginning, we worked hand in hand with Waitrose, and since then we have consolidated our presence not only in the British market, but also in France, Germany and Belgium, where we are focused on the store chains specialized in organic products, which appreciate the quality of our premium production. We also work in Spain, where the volumes are lower, although the market is growing,” says Fran.