In week 4, mandarins set the tone: Clemenvilla, Minneola, Tango and Nadorcott came in from Spain and Orri from Israel. Afourer and Nadorcott were shipped in from Morocco and Murcott and Nadorcott from Turkey. Italian lots complemented the market. The Israeli products were the most convincing in terms of their organoleptic properties; in conjunction with friendly demand, prices showed an upward trend in some places.

In general, demand could be met without any effort, so that valuations mostly remained at their previous levels. There were also isolated signs of price reductions, for example in Cologne, where Israeli imports became cheaper due to lower volumes. In Munich, on the other hand, traders increased their prices in some cases because availability was too low.

Regarding clementines; Spanish supplies dropped off. Italian and Moroccan inflows had a complementary character. Demand had diminished, as the batches were slowly running out of steam. The sellers were therefore forced to revise their prices if they wanted to avoid stocks. 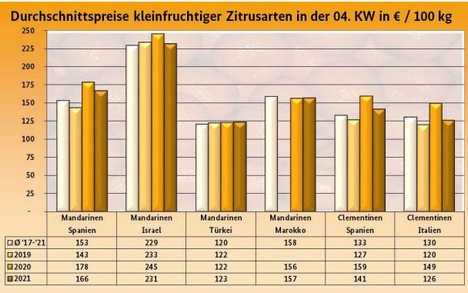 Apples
German Elstar, Jonagold and Boskoop continued to dominate and again gained strength in terms of volume. Demand could not keep up with the extended supply. Nevertheless, prices did not drop off fundamentally.

Pears
Italian lots obviously dominated the market, with Abate Fetel and Santa Maria leading the way. Sales were quiet and the demand was met without difficulty.

Table grapes
The availability of fruit from South Africa, Peru and Namibia had expanded. Demand, on the other hand, remained at the previous level, even dropping off noticeably in Berlin. Nevertheless, traders in general rarely had reason to modify their previous prices.

Lemons
Spanish Primofiori outweighed Turkish Enterdonato. All in all, the supply had not changed significantly. Interest increased, thanks to the bad weather.

Bananas
Supply only occasionally matched the demand adequately. As demand had worsened at points, distributors had to adjust their prices from time to time.

Cauliflower
While the presence of the dominant Italian batches was reduced, the importance of the complementary French lots expanded. Business was mixed: At times demand intensified, and at other times it weakened.

Lettuce
For iceberg lettuce, Spanish deliveries seemed predominant. Availability increased and outstripped demand. Distributors therefore had to lower their prices if they wanted to avoid surpluses.

Cucumbers
Spanish cucumbers dominated. Deliveries increased. Demand could not keep up. Prices crumbled in unison, on Friday at the latest.

Tomatoes
A wide assortment was available, in which the Moroccan round tomatoes had obviously expanded. TOVs from the Netherlands and Spain also gained in relevance.

Sweet peppers
Spanish shipments dominated, with Turkish and Moroccan ones complementing the action. The supply situation had not changed significantly; the demand could be met without much effort.