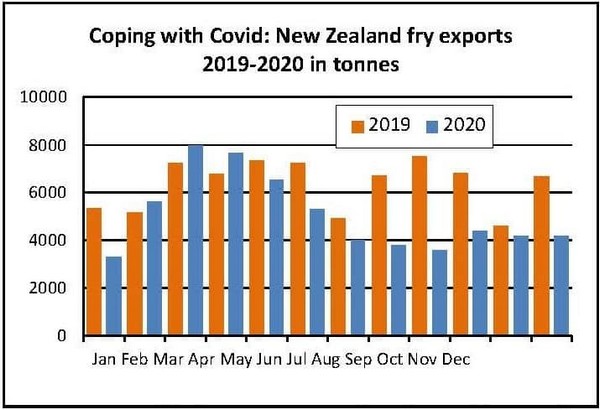 Sales to New Zealand's largest customer, Australia, continue to hold at 2,433 tonnes, which is 47.5% lower than a year ago. The improvements in sales at the start for the year have failed to continue over the second half. Australia's purchases for the 12 months are 8.9% lower at 40,477 tonnes, against an overall export performance which is down 20.8% at 60,519 tonnes.

Thailand showed more of the party mood, taking 463 tonnes of New Zealand fries in December, an increase of 63% on a year ago. The business was helped by a price which was a2% lower at NZ$1 329/tonne (US$952/t; €787/t). Sales to the Philippines were down 77% on a year ago at just 111 tonnes, and Malaysian sales were also well down on recent months at 52 tonnes. But Taiwan and Japan offered more encouragement. Sales to Taiwan were 9.1% higher at 108 tonnes and Japan was 18.5% higher at 224 tonnes. Both are enjoying lower prices than a year ago.