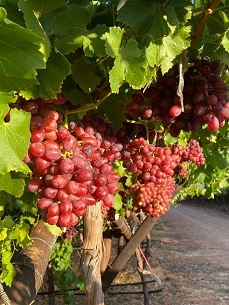 The Hex River harvest started unusually late, by ten to fourteen days, which cut into their window to market grapes to China (fortunately Chinese New Year is late this year). A record crop of 23 million 4.5kg cartons is in view for the Hex River Valley.

Right: the Crimson harvest starts this week at Mooigezicht Estates

Peak packing has commenced, running for the next four to five weeks, as Chile negotiates the fallout from the news of Covid found on cherries in China.

“Sales of cherries came to a halt and the uncertainty has had a very big effect on all types of fruit. We’re monitoring the situation very closely,” says Francois Rossouw, managing director at Mooigezicht Estates in De Doorns.

"The cherry market is going to struggle to recover before Chinese New Year on Friday 12 February. Arrival volumes after Chinese New Year is expected to be reduced to 300 containers from the expected crop of 85 million cartons. All cherries should be sold out within February. This news is important so that the impact of cherries won’t be extended to grape shipments in March."

Up to now the grape price per carton is on average 30 RMB lower than last year, but they need the Chinese market, especially for their black seedless and for premium varieties like Autumn Crisp, Sweet Globe or Crimson, Francois notes. They have already sent a number of containers to China this season.

"We expect the Chinese grape market to recover after Chinese New Year." 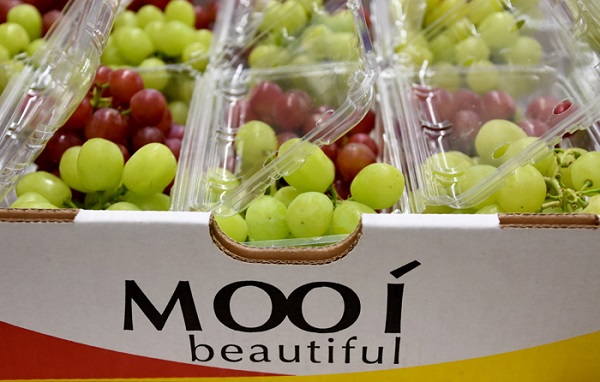 Mooigezicht Estates abbreviated its brand name in China to Mooi ("pretty"), incorporating Chinese elements into the design: the fused letters O refer to the number eight which denotes wealth. The scales of a dragon are symbolised by the yellow and red curves

Season characterised by wind delays
“The season has been characterised by delays caused by wind at Cape Town harbour. Four vessels arrive over the coming seven days in Europe. Those vessels could have a significant impact on the market, it also carries fruit from the early areas and the Orange River. Up until now the market was very positive, there was actually a general shortage of grapes as a result of the delays at Cape Town (up to two weeks).”

“We’ll have to see what the effect is of these four vessels arriving simultaneously in Europe.”

Consumers wary of loose grapes
The fear of Covid on fresh produce has had repercussions elsewhere: European and UK clients that used to receive half of their grapes in loose packaging, have now notified them that consumers are dubious about loose fruit and want everything in punnets, even the XL fruit.

“The market is asking us to send everything in prepacks and in punnets, which has an impact on packaging. Less weight is packed into a container and on a pallet, so your logistics and shipping are more expensive. We have to adapt and follow the market demand and trends.”

A cold and wet winter has resulted in a dramatic turnaround in the vineyards, with resulting good shelf life, colour and sugar, particularly in the Hex River Valley. They have seen exceptional shoot growth in the vineyards, much better than during the past few seasons, Francois points out. 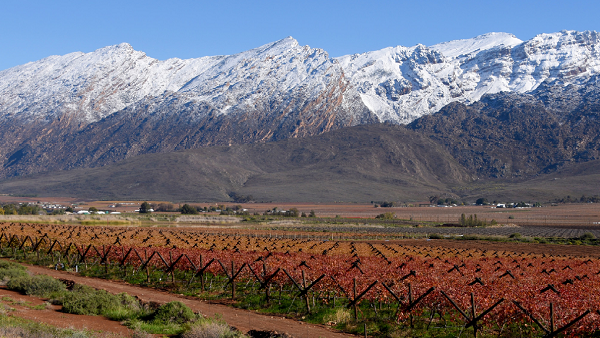 Matroosberg (Sailor Mountain) behind Mooigezicht vineyards in May 2020; there were six snowfalls recorded throughout last winter (photos supplied by Mooigezicht Estates)

“The general berry size for our entire harvest is looking exceptional, better than it has been for several years.”

Oversupply in Canada
Covid has changed everything for them – for instance removing or reducing the secondary markets, the wholesale market.

“There’s not an alternative for problem fruit, which could become a big problem. The absence of wholesale and catering has had a significant effect on trade.”

He uses the example of Canada, which has done very well for South African grape exporters over the past three years.

“The result is that increasing volumes have been exported to Canada and this season there are a lot of fruit from Peru and Chile competing with South African fruit and orders of all the traditional varieties have been stopped due to oversupply.”

Imperative for steri market development
“The industry needs to develop the steri markets of China, Vietnam, Israel and the USA. We can’t just be sending everything to Canada, the UK and Europe.”

Mooigezicht was an early adapter to the cold steri markets, accounting for 20% of total South African industry steri volumes by 2017.

Demand for white grapes oblige shift away from their strength
Trials on cultivars from mostly California and Israel determine the adaptability of these to their smorgasbord of soils on Mooigezicht’s farms.

The Hex River Valley’s humidity is higher than the areas of origin of many new cultivars, necessitating evaluation in-situ. It is a region renowned for its cold units (more so than in the other grape-producing areas of South Africa) and sharp day-night temperature differences.

The amount of Mooigezicht vineyards covered by netting increases every year

Some varieties just do not work in the Hex: they abscise flowers or the skin bursts – Flame was notorious for that, and Mooigezicht has taken out all of its Flame (it was among its top 4 cultivars in terms of volumes) and they are busy removing Midnight Beauty. These trials form part of their search for suitable replacements.

Varietal renewal is a swift treadmill: a variety has two years to prove its mettle. Arra29 PASSION FIRE™ holds good potential to be ready in time for Chinese New Year as replacement for Flame.

These days the big demand is for white seedless grapes and it has required a fundamental (and costly) adjustment among Hex River grape producers; colour development has always been the strength of this area.

“We have been very successful with red and black grapes in the Hex while we never used to be a region known for white grapes. Black grapes have fallen out of favour which obliges us to increase our percentage of white.”

Fifty percent of Mooigezicht’s grapes are Crimson. Sixty percent of their grapes are red, 20% are white and the balance of black is a rapidly dwindling segment, replaced by white grapes.

“Everything starts below ground”
The drought has concentrated their mind on the health of their soil. “Everything starts under the ground with the root system which determines everything, even better colour and sugar development. We’ve made a big mind shift to apply our attention below ground. The importance of healthy soil simply cannot be overemphasised.”

Cover crops have become non-negotiable in the vineyard for aeration as well as nematode and thrips management.

“One of our big challenges is our different soil types and their varying water storage capacities.”

Through soil analyses maps of the extremely variable soil types and its distribution on their farms are drawn up; every soil type, every block has its particular irrigation schedule, differing with regards to the frequency and volume.

A few times during the season they make use of Aerobotics to conduct drone surveys to evaluate growth and development and identify weak spots. "I have to say it has helped an enormous amount,” he says. 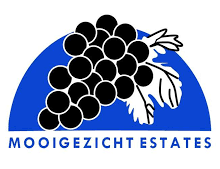