The Spanish Citrus Management Committee (CGC) has asked the European Commission (EC) to act urgently to curb the wave of Turkish citrus imports with pesticide residue problems. The incidents detected affect shipments of lemons, oranges, and especially mandarins. Official inspectors have confirmed that these either exceed the maximum permitted residue limits (MRL, in parts per million) or have been treated with active substances that are banned in the EU due to their high toxicity and/or because they are not environmentally-friendly. This is reflected in the official data of the RASFF, the EU's rapid alert network for food, which already in 2020 registered a record number of rejections of Turkish citrus fruits at the border (up to 54; five times more than in 2019. The situation appears to have worsened in recent weeks.

In fact, from January 1 to 29 of the same month, 57 batches of citrus from this country -two on average per day- set off an alarm for irregularities when undergoing any of the scheduled inspections; the vast majority - up to 43 of them - for the presence of unauthorized phytosanitary products. “The RASFF figures are very worrying and should spark an immediate response from the EU health authorities, because this could degenerate, at any given moment, into a food safety problem. What is also clear is the unfair competition that the Spanish citrus sector suffers, given its lack of instruments to fight pests or post-harvest problems that are used, in this case, by Turkish citrus growers,” says the president of the CGC, Inmaculada Sanfeliu.

The situation is particularly worrying in the case of Turkish mandarins for several reasons. On the one hand, because both during 2020 and so far this year they have accounted for most of the alerts. In 2020, there were 26 lots rejected due to phytosanitary problems, and that number has already been exceeded in the first 29 days of January (with 27). Secondly, because mandarins (and oranges) were included for the first time on the EU's 'special surveillance' food list relatively recently - specifically, in May 2020 (Execution Reg. 2020/625 of the Commission) and it was from then on that border controls (fundamentally in Bulgaria, where they cross by truck to enter the EU) were made mandatory for just 5% of the lots. This is low compared to the 10 % that was also imposed on oranges at that time, and even lower compared to the 40% of batches inspected at the worst moment for Turkish lemons and grapefruits, or even with the 50% that is imposed on those foods with countries of origin that are considered extremely risky.

It is a very low percentage to have registered such a huge number of rejections at the border. Therefore, the CGC is calling on DG Sanco - the competent authority for food safety - to "immediately" raise this minimum inspection threshold in the case of mandarins to 30 or 40%, or even warn the Turkish authorities of a possible temporary ban on imports from the EU until it is proven that they can comply with current regulations.

It should be recalled that Turkey was already formally questioned in this regard after being audited by EC inspectors in an official visit carried out in November 2019 to review its level of compliance with the import conditions for fresh fruits imposed by the EU. The conclusions of that report already mentioned deficiencies in the professional management of treatments in the field, "insufficient controls by the packing plants and the exporters," deficiencies in traceability and lack of control in post-harvest treatments.

The alerts reported in recent months confirm the deficiencies in the control system of certain pesticides subject to special surveillance. This is the case of substances such as chlorpyrifos and methylchlorpyrifos –banned in the EU- or of many others intended for post-harvest treatments, such as esenvalerate or prochloraz. For many of the notified alerts, the MRL's have been doubled. This situation contrasts with the massive efforts of the Spanish citrus sector to adapt to the ban of substances like the aforementioned chlorpyrifos, for which there is no alternative in the fight against pests as serious as that of the South African Cotonet. Despite this, there hasn't been a single alert since it was withdrawn from the European market.

Turkey, with an average of 257,000 tons imported annually in the EU over the last 5 years, is the EU's third largest non-EU supplier in the Mediterranean. Its lemons, grapefruits, mandarins and, to a lesser extent, oranges have important market shares in countries like Germany. 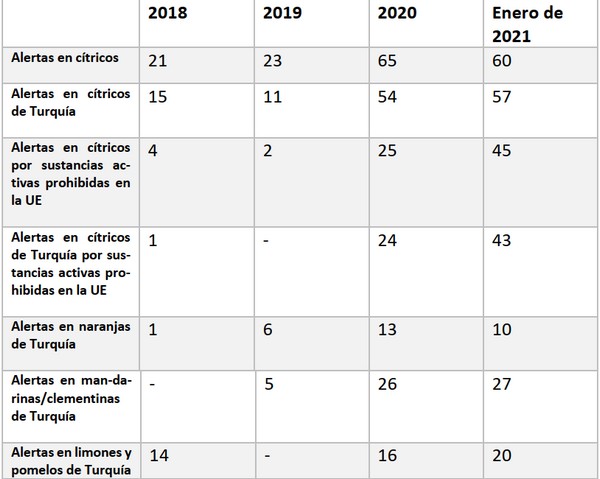