The representatives of the Federation spoke with the Minister of Agriculture about the issues that are a priority for the provincial agricultural sector. One of these issues was the creation of the Esparago Verde Spanish Interprofessional Association, a project led by the Federation that already unites organizations, cooperatives, and the most representative asparagus companies at a national and regional level with a common commitment: defending and improving the competitiveness of green asparagus in the market. 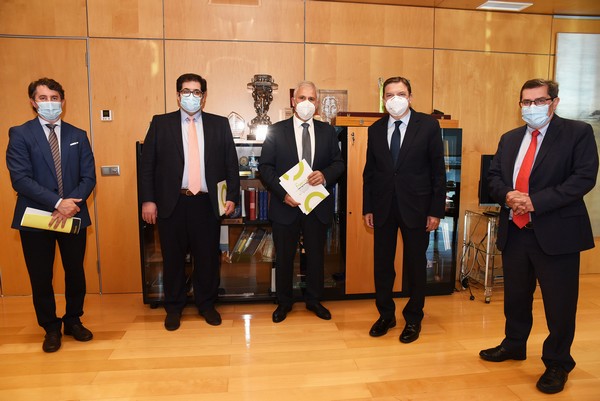 Granada accounts for more than half of the country's green asparagus production with 5,621 hectares of crops and 26,468 tons. This province has 13 agricultural cooperatives with more than 4,000 farmers. In recent years, the Federation has promoted the creation of this Interprofessional Association to defend the interests of producers, ensure the food chain functions properly, promote transparency in markets, and contribute to the regulation of supply. This tool is also effective to boost promotion and undertake crisis management in the markets.

Currently, the Esparago Verde Spanish Interprofessional is taking the last steps to achieve its official recognition. It brings together a total of 27 entities, including organizations, cooperatives, and companies located in Granada, Malaga, Seville, Cadiz, Jaen, and Guadalajara. They have 10,787 hectares of crops, which accounts for 87% of the national surface, and produce 49,880 tons (i.e. 83% of the national production) achieving a turnover of more than 59 million euro.

The president of the Federation, Fulgencio Torres, reminded the minister of this Association's capacity to continue consolidating and improving the cultivation of green asparagus, which has an enormous economic and social relevance in the producing areas. Antonio Fco. Zamora, the president of the Spanish Green Asparagus Interprofessional Association, stressed that the Interprofessional will allow channelling the sector's needs to achieve better commercialization and balance in the value chain.

The Minister of Agriculture, Luis Planas, said this project was a great initiative to articulate the interests of the different links in the chain. He also highlighted the sector's interest in improving and strengthening its competitiveness in the markets.