Extreme weather conditions hit Spain in recent weeks. This severely affected the vegetable market. On Tuesday, the Belgian supermarkets responded that, currently, it's challenging to get enough vegetables. But the situation also caused problems for Dutch supermarkets.

Detailresult
DekaMarkt and Dirk are Detailresult supermarkets. Their shoppers might have to miss out. That's because fewer products are being supplied due to availability and quality problems. "We have strict product quality requirements to provide our customers with high-quality products," explains Fiona Wijnbergen. "Conventional  aubergines and courgettes and several organic fruit-vegetables varieties have been hit hardest."

Dirk and DekaMarkt have, for example, been selling only Dutch cucumbers since autumn. That's in both winter and summer. "We prefer getting products from as nearby as possible. That shortens the farm to fork chain as much as possible. Dutch cucumbers are very tasty too. This year, we've also started a trial with Dutch lit-cultivation vine tomatoes. If it's successful, we can expand this next season. Then we won't have to import this product from Spain in the winter anymore."

Jan Linders
"The bitter cold and snow in Spain caused all sorts of problems. These include snow and hail destroying plots. That means much of the crops couldn't be harvested. Or they are of poor quality. The cold halted products' growth as well. That also cause harvest delays," says Gineke Wilms of Jan Linders.

"Truckloads of products got stuck in the snow too. So they didn't reach our DC on time. The rising temperatures quickly solved the logistical problems. But it didn't help the delayed growth. That will probably continue to plague us for weeks." 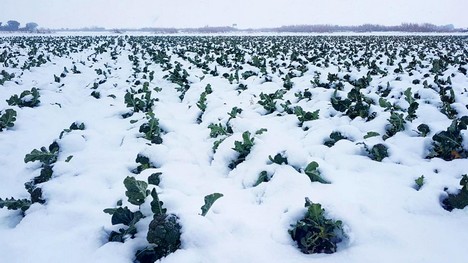 Open field vegetables like broccoli, cauliflower, and iceberg lettuce have been the most severely affected. That's according to the supermarket chains. So have fruit-vegetables like courgettes, aubergines, and tomatoes. "Several other products, like cucumbers, are also causing problems. We've been getting this product from our own region year-round. So, this problem doesn't apply to us. We have sufficient availability of these."

"The extreme weather didn't affect the whole of Spain equally badly either. It's, therefore, sometimes possible to buy products from other areas. There are alternatives, including France and Italy. But we've made little or no use of them so far," concludes Gineke. 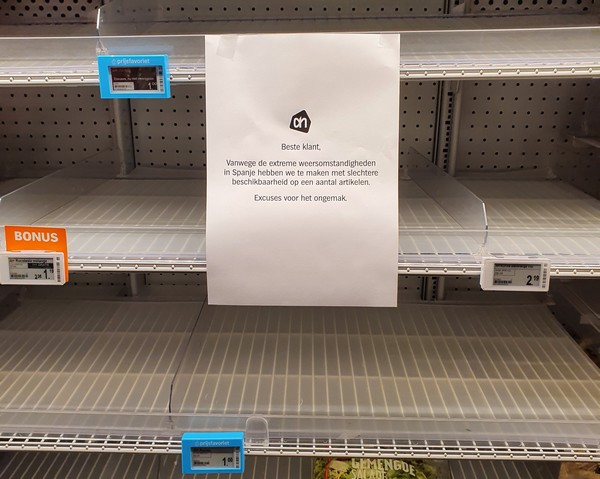 Albert Heijn
The extreme Spanish weather affected the Albert Heijn supermarket chain too. But according to Pauline van Den Brandhof, availability has now been restored. "After weeks of snow and cold, wet weather, the weather in Spain is improving. Temperatures are on the rise, and there's no more precipitation in that country. Regardless of that, we're getting an increasing number of products from the Netherlands. We've been buying products from as close to home as possible for years, especially when needed."

Jumbo
Just like the other chains, Jumbo also experienced issues because of the weather conditions in Spain. "We can, however, meet our shoppers' demands for now. That's thanks to our suppliers and partners," says Michiel de Ruijter of Jumbo. "We're in constant contact with our partners. And, if necessary, we can adjust our offer accordingly."