The apple is by far the most harvested tree fruit in Germany. As reported by the Federal Statistical Office (Destatis) on the basis of final harvest results, the volume of apples harvested in 2020 was 1.02 million tons, about 3% above the previous year's figure of 991,500 tons, but 15% below the harvest amount in the record year 2018.

In that year, 1.20 million tons were harvested, the largest quantity since 1992. In 2020, more than 12 kilograms of apples were thus harvested per capita throughout Germany. The largest share of the apple harvest was accounted for by Baden-Württemberg with 403,200 tons (39%) and Lower Saxony with 279,700 tons (27%).

The two largest German apple-growing regions, Altes Land, which covers Lower Saxony and Hamburg, and the Lake Constance region, are of particular importance. While the harvest volume in Baden-Württemberg remained virtually unchanged from the previous year, with an increase of 1%, it rose by almost 6% in Lower Saxony. Across Germany, the area under apple cultivation has increased by more than 2,000 hectares since 2010 to 33,900 hectares (+6.6%). 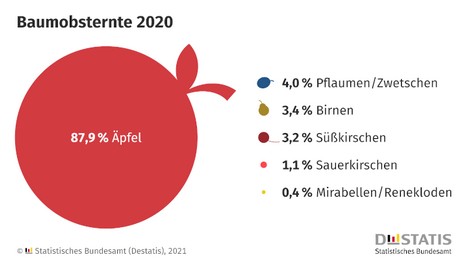 About a quarter ends up in processing
More than 70% of the apples harvested (720,700 tons) were offered for sale as dessert fruit. Twenty-eight percent (287,300 tons) were used for industrial purposes, such as the production of fruit juice, preserves or cider. The remaining 15,400 tons counted as own consumption or storage or processing losses and were not marketed.