'Holstein Cox and Cox Orange increasingly disappearing from the range'

Local apples obviously dominated the scene. More than any others, Elstar, Jonagold, Boskoop and Braeburn were available. Holstein Cox and Cox Orange increasingly disappeared from the range. Italy primarily participated with Granny Smith, Golden Delicious and Pink Lady. Pink Lady and Jazz were the main French varieties, but they did not achieve anything more than supplementary status. In Frankfurt, Elstar, Idared and Red Jonaprince appeared from the Netherlands, of which the 85 to 95 mm sizes could be sold quickly. The Polish goods had gone out of the market.

In general, the demand was quite friendly. Volume-induced price increases were frequent, especially for German goods. Quality-related discounts were recorded in Frankfurt for domestic Pink Lady. In Berlin, domestic fruit became slightly cheaper as handling was too slow. In Cologne, prices for German Boskoop fell a little. 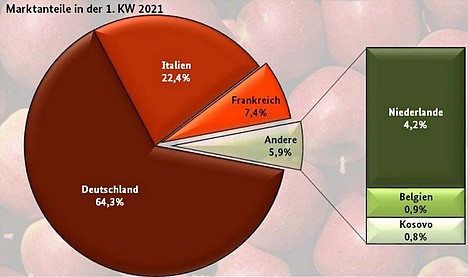 Pears
Marketing was fairly quiet. Supply was reasonably harmonized with demand. Therefore, the prices did not change significantly.

Table grapes
Imports from South Africa, Peru and Namibia dominated. Demand was not particularly strong and was therefore easily fulfilled. Quality occasionally left something to be desired, so that a wide price range was established.

Oranges
In terms of quantity, Spanish navelina oranges outperformed all other blond oranges. In general, the turnover was quite calm. Prices settled at a stable level.

Small citrus fruits
Spanish clementines predominated, even if their relevance slowly diminished. Clemenules occasionally left something to be desired in terms of quality, and sales dropped as a result.

Lemons
Spanish Primofiori predominated. The winter weather had improved demand, but this was not fundamentally reflected in the prices.

Bananas
A quiet trade prevailed after the holidays. The sales figures before Christmas were mostly not matched. In some places, surpluses had formed which were to be reduced as quickly as possible by means of in some cases significant reductions in price.

Cucumbers
Spanish cucumbers dominated the market, with Greek, Dutch and Belgian rounding out the ranges. Rain showers, low temperatures and insufficient sunshine in the growing regions unanimously caused a shortage of produce.

Tomatoes
The impact of the lockdown was felt, as restaurants and caterers were absent as buyers. As a result, there was a plentiful assortment, which was sufficient to meet demand without any problems.