Alibaba Agriculture revealed on January 9 that by the end of the month, Dekopon tangerines will become available on Alibaba’s online and offline platforms, such as Hema. The key factor behind this development is the company’s newly developed five digital agricultural processing centers across China. 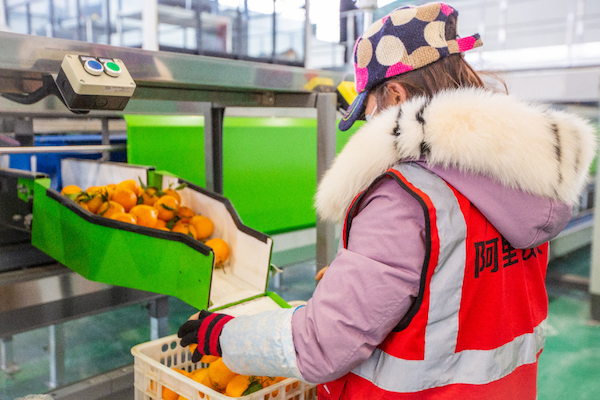 Alibaba’s processing centers introduce various smart devices
In Shandong, a sorting line for locally grown cherries will start operating in the Alibaba Zibo Digital Agriculture Warehouse this April. So far, the mainstream sorting equipment in China is only able to grade the size and appearance of the fruit, but not the color. According to industry insiders, color is not only of great importance to the appearance but is also an important indicator of the ripeness. The new sorting equipment not only adds a color index, but also establishes a more detailed index for the inspection of the appearance, to eliminate problems such of soft flesh under the peel, cracked fruit, and deformity.

In addition, the Alibaba Production Warehouse in Xi’an, the fruit distribution hub for Northwest China, is developing a new robot whose main function is to transport the packed fruits to a location according to instructions and stack the boxes neatly. As the Spring Festival approaches, Orah mandarins from Yunnan and Guangxi are expected to reach large marketed volumes by mid-January. To this end, Alibaba’s two production warehouses in Kunming and Nanning are equipped with three fully automatic smart packaging lines, which can pack at least 100,000 packs per day. From sorting to packaging, 70% of the work can be done by robots.