The yellow dragon fruit from Palora, Ecuador, has multiple seasonal peaks throughout the year. Currently, the volumes are low, but once February arrives the volumes will increase again. In addition to fluctuating volumes, the pricing fluctuates a lot too, which causes challenges for many of the small growers in the region. 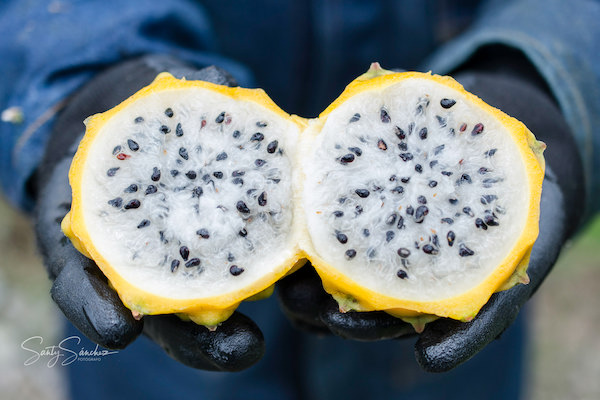 Growing demand in the US
The Palora variety pitahaya, or yellow dragon fruit, is native to Palora region. “It is grown in many other regions besides Palora now too, but this is where it originated,” says Siris Barrios of Amazon-Fruit Frexot Productora y Comercializadora S.A. Barrios explains that because of the unique Amazonian climate in the region, this variety of pitahaya grown in Palora has a consistently high brix and a long shelf-life.

The popularity of the pitahaya has been rising in the US, as the exotic nature of the fruit is becoming more accepted in regular markets. “They can be found at big grocery chains now. They are no longer only for small specialty retailers. The yellow dragon fruit is much sweeter and has a longer shelf-life than the red variety, and there’s definitely been a boom in the overall demand in the US,” Barrios shares. 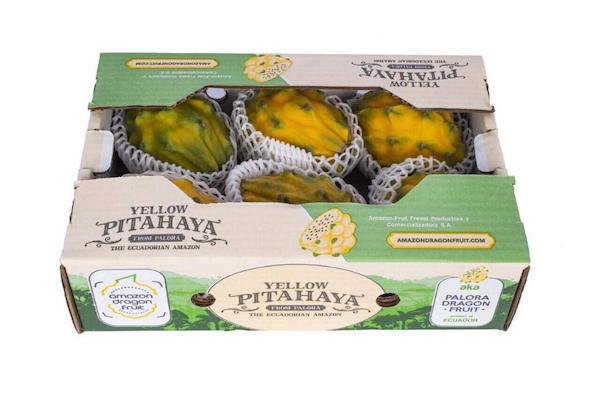 October peak saw high volumes, small sizes and low prices
Despite the increased popularity and demand of the pitahaya in the US, the growers in Ecuador continue to struggle with low pricing. “This October, the volumes we were harvesting in Palora were much higher than usual, and this brought the prices down very low,” Barrios shares. October is usually a peak month for the pitahaya but this past October the volumes were much higher volumes than were expected. “The volumes were comparable to what we usually see in March, which is our biggest peak of the year. Usually, the price in October for the growers is around $3-3.5, but we were seeing prices of $1 or sometimes even lower,” says Barrios. 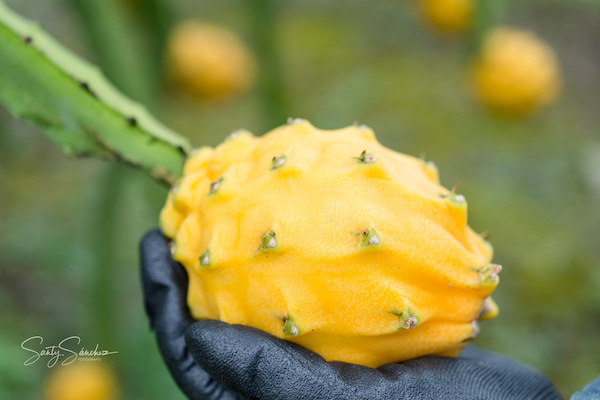 March expected to have low volumes
After the high volumes and low prices of October, there were a few weeks in November when the prices rose again as volumes decreased. The higher pricing held for the December season, says Barrios. “In the December season, the prices were around $2-2.75 and we’re still seeing those prices now in January, even though the volumes have gone down again,” she says.

The next peak will be in February. “Usually, the volumes start to ramp up again in February to lead into the biggest peak of the year in March. This year, though, we are expecting to see very low volumes in March because the bloom for the March harvest saw really high levels of bloom drop, indicating that there probably won’t be a lot of fruit. We believe that the growers who had the higher-than-usual volumes in October will likely see low volumes in March this year,” Barrios shares.

It is expected if March ends up bringing low volumes of pitahaya, that the pricing will then go up again. “For February, however, the prices will probably be low again,” says Barrios. The low pricing has been really challenging for the growers in Palora, especially because the majority of growers in the region are small growers. “Of the number of producers who are registered with AGROCALIDAD for monitoring of the fruit fly using traps, only 3.5%, or 22 producers have farms larger than 7 hectares, and 61.5%, or 437, producers have 1 hectare or less of land. Smaller farms actually have higher costs of production, and the prices that we’ve been seeing are much too low for these farmers to make any sort of profit,” she explains. 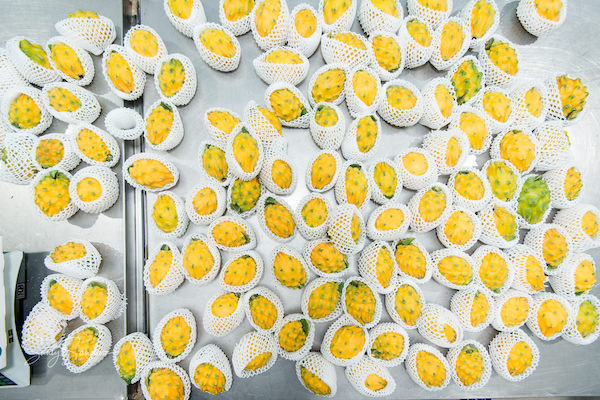 Low prices cause unrest among growers
The reason for the low prices is because there is no set standard price, and most of the fruit is sold on consignment. Barrios says: “Whenever we see these low prices, it causes some political instability in Palora. This past October, too, the growers wanted blockades to prevent the fruit from leaving the region unless they could get higher prices. This is something that unfortunately happens quite a lot whenever the prices are low and will likely happen again in February too. Nothing ever comes from it, but we all hope that positive changes will be made in the future.”

Despite all this, there has been at least one positive change for the growers of Palora in 2020: “The tax that we pay for exports, which comes out to about 4 cents per kilo, is now going directly to the municipality and being used to help our industry – for example, the town is now taking care of the fruit fly monitoring for us with this money. My hope is that in the future there can be a more collective marketing effort for the Palora pitahaya and help it become its own brand,” Barrios concludes.