Value-wise, however, 2020 was a record year. Spain exported €14.7 billion worth of fresh fruit and vegetables last year. That's eight percent more than in 2019. That means Spanish export product prices were considerably higher. Fresh fruit was as much as 17% more expensive last year than in 2019. At seven percent, the increase was less for vegetables. 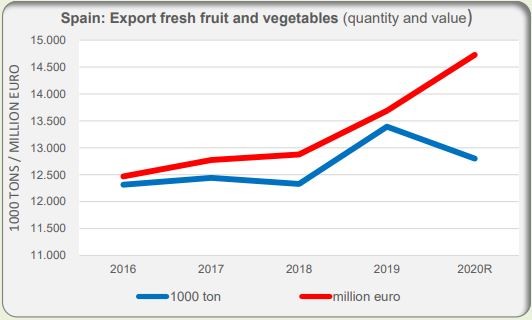 Mainly fewer oranges, mandarins, and tomatoes
The Spanish export trend largely consists of oranges and mandarins. Significantly fewer of these two products were exported in 2020 than in the previous years. Exports of both products fell by almost ten percent. Large fruit, such as watermelon, exports also plummeted in 2020.

Yet several products' exports increased again in 2020. These are khakis, garlic, grapes, aubergines, apples, and avocados. These products have annual export figures of between 150.000 and 200.000 tons. 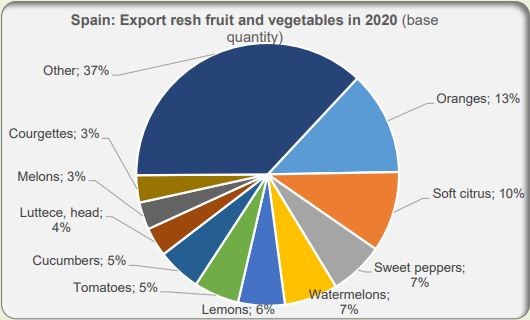 85% to EU(27) countries
Spain exports most (85%) of its fresh fruit and vegetables to the EU(27) countries. In 2020, these exports decreased slightly less than those to other countries. With more than a quarter of the total, Germany is Spain's top client. Exports to this country fell by only three percent. That makes it a little better than the average.

France is Spain's second most important export destination. Exports to this country fared even better, with only a one percent loss. Exports to the United Kingdom also remained relatively stable. Those decreased by three percent. Exports to the Netherlands, in fourth place, didn't go as well. 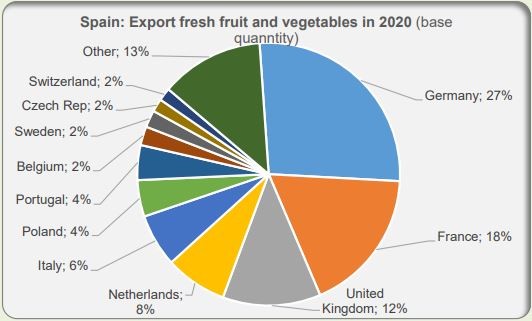 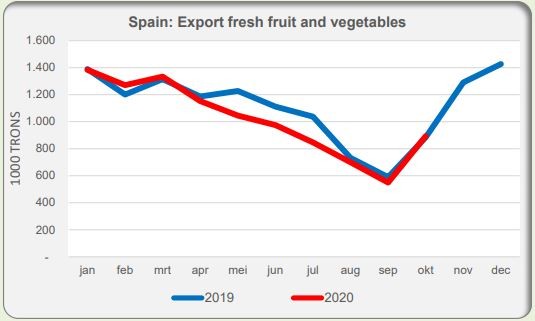 Fewer exports in summer, with higher prices too
The summer months, between May and August, were solely responsible for the decreased Spanish exports. That was true for all the major products. Mandarin exports were also significantly lower in January and February. Top vegetable product exports regularly experienced difficulties in 2020's first quarter as well. These were tomatoes, bell peppers, and cucumbers.

Spanish export prices were higher throughout the year. But, the difference was more apparent after the first quarter of last year.

Of the top products, only Spanish bell pepper exports were up. Among the less important products, there were several growers, such as avocados, persimmons, and grapes. Strawberries exports also performed reasonably well.

A lot from Morocco
Spain imported noticeably more Moroccan products. In 2020, they imported roughly 500.000 tons of fresh fruit and vegetables from that country. That's 25% more than in 2019. In particular, many Moroccan watermelons came in. Imports of Moroccan tomatoes also grew substantially. Spain bought in a quarter more - totaling 80.000 tons - of these products. 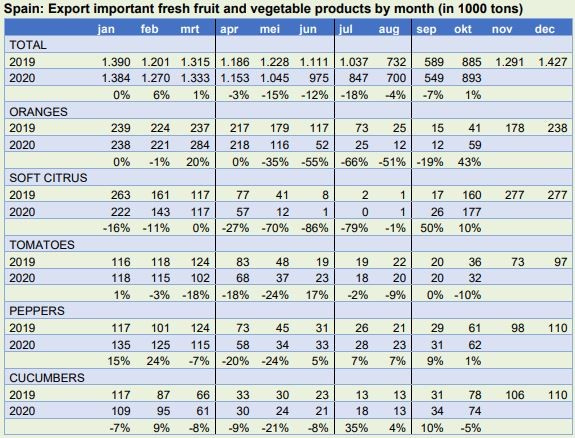 This concerns (re)exporting South African products in the summer. Then, many tomatoes are also exported from the Netherlands to Spain. Although, this was less in 2020. Avocados and grapes are the other re-export products that often go to Spain via the Netherlands.