“We’re buying out of Mexico right now and it’s been okay. The quality is hit and miss,” says Sav Tsoukalas, president, Savco Worldwide, Inc. in Mississauga, Canada. “I think it’s just cool weather and not a systemic issue such as disease in the fields. It’s maybe that you hit a pocket of poor quality because it was raining for a few days.”

Supplies of watermelons are also currently coming from Brazil and Guatemala. Meanwhile Florida has been planting this week for the spring watermelon season.

However, movement seems to be an issue for the fruit, which tends to be one whose sales are tied with the temperature—weather goes up and so do watermelon sales. “We’re able to fill the demand we’ve had but there’s no excess demand,” says Tsoukalas. “Other commodities have been on fire for demand but when you price out $12 or $14 for an item such as a watermelon, it’s a harder allocation of dollars than maybe putting $4 on a bag of clementines. A lot of people are putting more into the citrus side of it which is perfectly fine. Watermelon is just inconsequential during this time of year.” 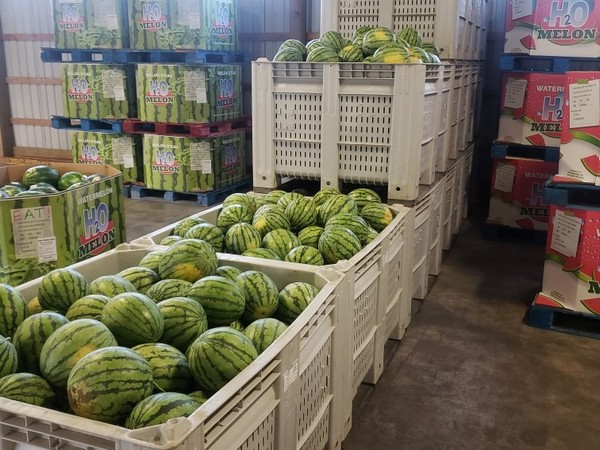 Higher pricing too
Pricing on melons is on the higher side as well and Tsoukalas notes that that’s part of the demand issue given there’s little to no foodservice demand for the fruit right now. “I think the price will stay in that range because there’s not a ton of oversupply in the market,” he says. “We’re getting into the minus temperatures very soon and the demand may drop a little more. Though the only benefit to the watermelon category right now is related to COVID-19--shoppers are captive. If they’re going to be home, they may consider buying this type of item because they’ll be home and will eat it.”

Meanwhile, Tsoukalas notes an increasing concern over an issue related to offshore product and that is logistics. He notes the company had been discussing getting oranges out of Pakistan and working with steamship lines to get containers to ship to Vancouver. “And they’re asking for 60-day transit times from Pakistan to Toronto. We can’t run produce with that amount of time,” says Tsoukalas. This follows earlier in 2020 where there were significant cost increases in air freight from Pakistan and he says issues such as this is making for a somewhat fractured supply system. “In my whole career I haven’t had many conversations where people said “space is limited” or “they’re not running this line anymore.” I don’t know if it’s the port strikes or increased demand or people not working as much that’s creating this situation?” he says.

That said, Tsoukalas notes that he believes capacity for product out of Central America isn’t an issue but that it’s more related to product coming in from Asian destinations.