The Australian mango industry experienced its December peak in the week leading into Christmas.

National crop forecast figures, released by the Australian Mango Industry Association's (AMIA) weekly My Mango newsletter, showed that 412,000 (7 kilogram) trays were sent to market in the week ending December 18. Since then, production has slightly decreased to 219,000 trays in the week ending January 1. Many regions are finishing their high-volume crop harvests, meaning volumes are expected to ease from now until the end of the season.

In the Bowen Burdekin region, R2E2 and KP harvests are complete and growers are conducting post-harvest activities while the Honey Gold harvest is in full swing and will finish next week. 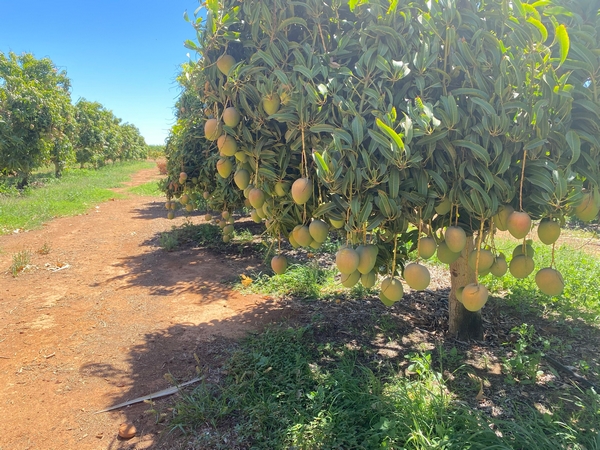 Heavy rain in some Queensland regions has made harvesting difficult, with more heavy falls forecast across much of the state, including further north in the Mareeba/Dimbulah region.

"The R2E2 and Calypso harvests are continuing in full swing this week, with harvest expected to be completed next week," My Mango reported. "The KP harvest is slowing down with small volumes being harvested this week. The Honey Gold harvest is continuing in full swing with consistent weekly volumes being picked throughout the rest of January. The region has had a large amount of rain since Christmas and this wet weather is causing challenges for growers in harvesting their remaining fruit. Most growers have completed their KP harvest and are conducting post-harvest activities in the lead up to the Keitt harvest."

The national seasonal high month was in October, with just under 1,100,000 trays sent to markets in just a two-week period. Growers in the northern regions of Australia; Darwin, Katherine and Kununurra have completed their seasons, and are onto post-harvest activities and preparing for their next season.

However, the South East Queensland region is busy, heading into their expected peak in mid-January.

"The R2E2 and KP harvests are in full swing this week, along with other varieties such as Nam Doc Mai," My Mango reported. "The bulk of the KP harvest will occur this week, and next, while the bulk of the R2E2 harvest will be this week. The Honey Gold harvest is in full swing with the bulk of the volume to be picked throughout January. The Calypso harvest is forecast to begin with small volumes this week. The wet weather is causing challenges for growers in harvesting their fruit. More rain is forecast for the end of the week."

The AMIA added that Carnarvon growers are continuing to pick early and mid-season varieties in the region. Most growers have now done at least one select pick. Late season varieties such as Honey Gold are not expected until later this month and into February. While, Gingin growers have experienced significant fruit drop after a week of hot weather in December but much of this fruit was nubbins from the long, cool flowering.

To receive the "My Mango" weekly in-season newsletter, subscribe at https://www.mangoconnect.com.au/