Rising investment in infrastructure, people and research across Asia over the last 20 years has produced dramatic improvements in living standards. Nowhere is this more visible than the agricultural sector, where crop yields have grown six-fold in China and two-fold in India over the last 40 years.

Rising potato production has played its part in growing farm incomes and more diverse diets. Over the last 10 years, potato production in seven Asian countries—Bangladesh, China, India, Indonesia, Nepal, Pakistan and Vietnam—has risen by more than 50%, while the value of farmgate sales have more than doubled to nearly USD 37 billion per year. 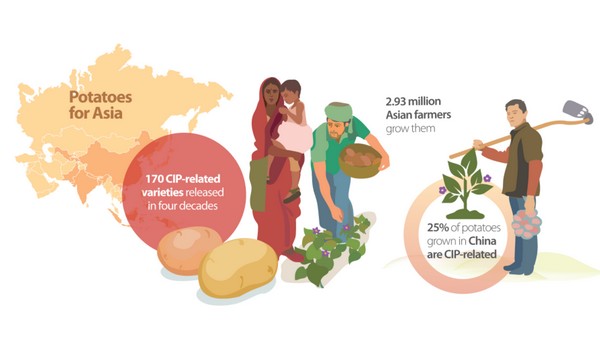 Decades of success
An assessment published in 2018 found that 19% of the total land area devoted to potato production in these seven countries was planted with varieties bred at the International Potato Center (CIP) or by national partners in collaboration with CIP. Between 2008 and 2015, the area planted with those varieties more than doubled to 1.43 million hectares. Over the past 40 years, CIP scientists have helped 2.93 million potato farming households overcome challenges such as limited land and climate change to produce more food and generate more income, while diversifying the diets of rural and urban consumers.

CIP’s collaboration with Asian partners continues to result in new varieties. An example is Kufri Lima, a heat-tolerant and virus-resistant potato bred at CIP headquarters in Peru and released in India in 2018.

The Chinese variety Cooperation-88 (C88) is one success story. The result of collaboration between CIP and Yunnan Normal University, C88 was growing on more than 160,000 hectares by 2015. A follow-up analysis found that C88’s cumulative value for farmers and consumers in Yunnan Province alone was approximately USD 2.84-3.73 billion.

C88 and five other CIP-related potato varieties together constitute about a quarter of the potatoes grown in China. Those six and dozens of other CIP-related varieties have been successful in Asia thanks to a combination of disease resistance, adaptability to challenging climates and environments, and characteristics that local consumers want. They include early-maturing potatoes that are key to recent work on sustainable intensification, which enables farmers to grow more food on the same amount of land with fewer inputs.

New varieties
CIP’s collaboration with Asian partners continues to result in new varieties. An example is Kufri Lima, a heat-tolerant and virus-resistant potato bred at CIP headquarters in Peru and released in India in 2018. Because Kufri Lima is ready to harvest 80-90 days after planting, it is ideal for sustainable intensification, able to be grown between rice crop cycles on land that would otherwise be fallow.