The Dutch United Arable Farmers Association (VTA) has completed the first stock assessment among its members. That was at the beginning of December for the 2020/2021 season. Importantly, this preliminary estimation showed that successful exports ensured a considerable gap was filled.

The freely available stock is, therefore, 12% below the long-term average.  All that, for onions that weren't at a high production level anyway. That finding is in line with the practical picture of extremely successful exports. The total volume up to week 48 was already more than 70,000 tonnes above the previous season's average. 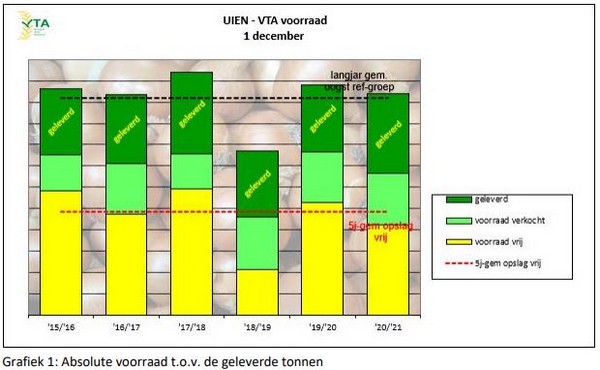 Lower yields per hectare
The average yield for all submitted results was 52,5 tons/ha. That's about 2 tons lower than initially established in trial harvesting. It's slightly below the long-term average. A correction was made for last year's extremely dry season. The minimum is 20 tons/ha, while, with seed onions, the maximum is 90 tons/ha. Yellow onions' yields are 53,0 tons per hectare, and for red onions, it's 48,8 tons/ha. In the north of the Netherlands, yields amount to 57,3 tons per hectare. In the southern provinces, it's 46,1 tons/ha.

Area growth
The Dutch Central Bureau of Statistics shows a countrywide onion sets area growth of 0,1%. That's resulted in 5.5% more area being used for this product.  The acreage under seed onions decreased by 1.6%. There was a 2,5% decrease in acreage among the stock inventory participants. This shrinkage is particularly noticeable among the farmers in the southwest cultivation region. There the decline was 4.9%. In the north, participants' field sizes remained practically the same.

There is, therefore, 12% less total free stock than the long-term stock inventory average for this period. Compared to the previous season's first stock inventory, the free stock is more than 19% lower. There are fewer of, especially yellow onions.