In 2020, at more than EUR 1 billion, avocados were the top Dutch import product, by value

In 2020, in fruit and vegetables, avocados were the top Dutch import product. With an import value of no less than €1.1 billion, avocados represented 12% of the total Dutch imports of fresh fruit and vegetables. Those amounted to €9 billion in 2020. Ten years ago, avocados just made the top ten. It was only worth just over €100,000 out of a total of €3,8 billion. In today's value, that's more than €4,5 billion. Another notable riser is blueberries. In 2020, this product's import value was as much as €500.000. That put blueberries in fifth place. 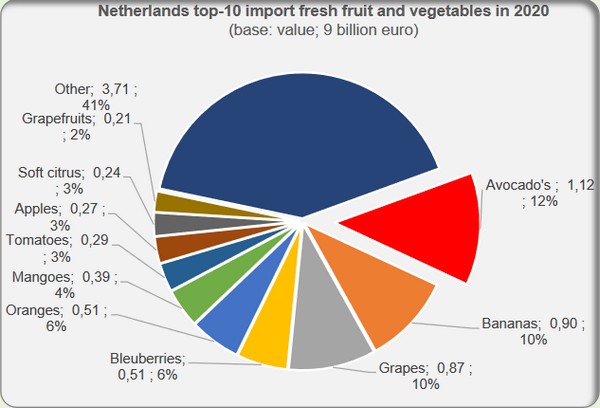 By volume, bananas are no. 1
Considering total volumes, bananas have become the Netherlands' top import product. In 2020, over 1,2 million tons, valued at €900.000, were imported. Ten years ago, oranges were the most important import product in terms of quantity. Now oranges are in second place, with grapes at number three. In 2010, grapes were the number one product in terms of value. 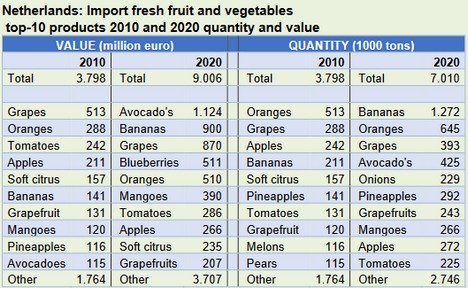 Bananas top by volume
The Netherlands' most important imports were avocados, onions, pineapples, grapefruits, mangoes, apples, and tomatoes. That's in addition to bananas, oranges, and grapes. In 2010, apples were still in third place but had since dropped to ninth place. Tomatoes also dropped a few places. Onions weren't in the top ten in 2010.

Mandarins, melons, and pears have dropped out of the top ten. Nevertheless, more mandarins were imported in 2020 than in 2010. In ten years, Dutch imports (including re-exports) have grown by no less than 85%. Newcomers are blueberries, onions, and mangoes.