Pineapples are seeing unusual movement for the holiday season.

“Christmas is an interesting time because this is usually when pineapples are in a very good position market-wise. But 2020 has been a weird year for some commodities and we feel the market is a bit oversupplied. The movement is just not there on the wholesale side. There’s a lot of availability that we’re seeing,” says Anthony Serafino of Exp Group, LLC based in North Bergen, NJ.

He does note that with tropical commodities in general, movement patterns can turn fast thanks to factors such as weather conditions from supplying countries in South and Central America. “This though is the time of year that pineapples move—like watermelons in the summer. But they haven’t been moving,” says Serafino.

That said, it’s been an interesting year for tropicals. “Comparing it to bananas, this is the most we’ve ever seen bananas exported into the U.S. whether it’s from Central America or Ecuador. Ecuador exported most bananas on record,” he says. “In produce trends and economic conditions of certain commodities, we’ve seen a lot of tropicals that have gone up and come down. Ginger was hot at one point and then got quiet and now is scarce for example.” 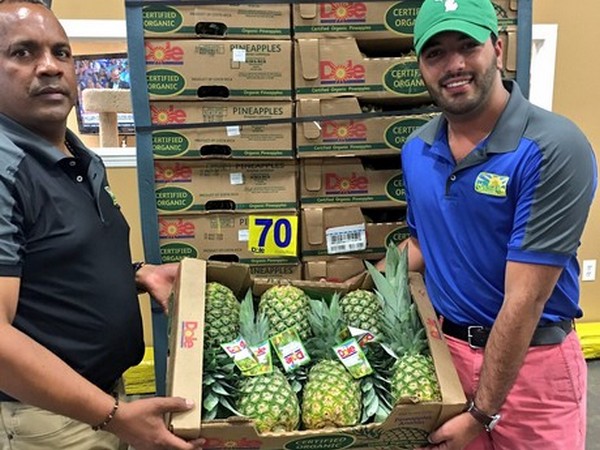 Nicolas Sanchez and Anthony Serafino show a box of pineapples.

Change in consumer habits?
Serafino says it’s difficult to say exactly why pineapples aren’t moving right now. “It’s a weird year and I feel like people aren’t buying pineapples as they were in previous years,” he says, adding this is a marked difference from even just a few months ago when the fruit was moving at a regular pace.

Looking ahead though, he remains optimistic. “It can’t get any worse. I think we’ll be like this until through the holidays and maybe like this until we get into mid-January. Then fruit will start moving,” says Serafino. “The vaccination program will roll out and we’ll move towards more typical normal produce trends. Supermarkets typically see better Januarys because of the healthy eating resolutions. For us, it’s all about market conditions so a good January and a bad January can fluctuate.”