Cooperative company Sanifrutta is leader in fresh fruit processing and packing. In its establishment in Costigliole Saluzzo (Piemonte, Northern Italy) the owner Eraldo Barale, with his technicians Alex Tallone and Alberto Boschero, take us to two cherry orchards covered with the Artes Politecnica Acqua Stop Net (patent n. 102017000068976). Both projects are monoblocks with one layer of anti-rain net on the top and anti-insect net on the perimeter and were installed by company Khuen. 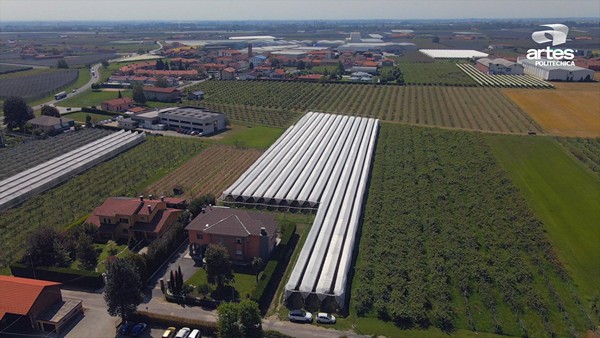 The company decided to cover the cherries with net instead of plastic film for three main reasons: first, one layer of anti-rain net weighs less than the film, which is positive for the whole installation; then there is the difference in temperatures, which are much lower under the net. In-field tests confirmed that there is a 4/5- degree difference under the nets compared to the outside temperature; lastly, one factor to consider is the relative humidity which can be found under the plastic film on rainy days. As Alex Tallone said "we prefer to have a microcirculation of air inside the cherry orchard, which means a reduction in fruit rotting, fungi risk, wood bacteriosis, etc.". 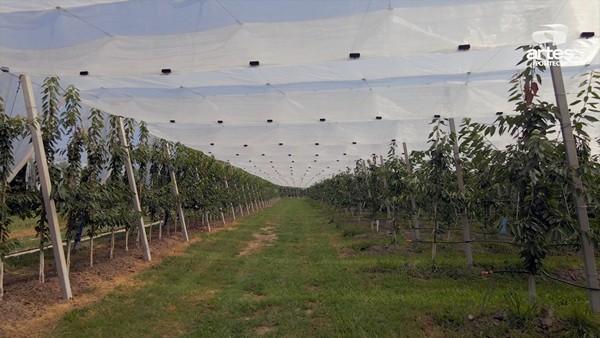 Furthermore, Acqua Stop has the double function of of being an anti-rain and an anti-hail net, whereas the plastic film requires growers to put a second wire-system with hail netting over the plastic protection, especially in areas with regular hailstorms, as is the case in the Piemonte region.

"Talking about climate change," he added, "the anti-rain film needs to be changed at least once in the life cycle of the orchard. Theoretically, when we speak about anti-rain nets, if this is installed and kept ad hoc it should last for the whole crop life (at least 12/15 years). But we will tell you more in the next few years". 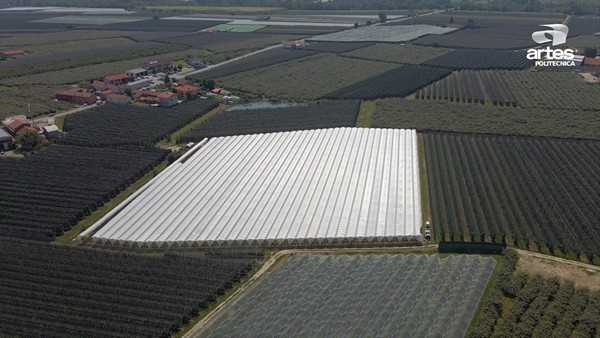 In the first installation that we visited in Verzuolo (Piemonte) the Acqua Stop net was installed on an existing orchard with wooden poles. Khuen technicians made all necessary modifications to install this netting, in order to adapt the system to the existing structure without compromising its characteristics.

Sanifruttàs orchard have been covered with anti-rain nets for three years now and the results are more than positive: low or no cracking on the fruit (despite the hailstorm of June 2020) and optimal resistance to very severe atmospheric events (e.g. the violent storm in Verzuolo on 18th June 2020). 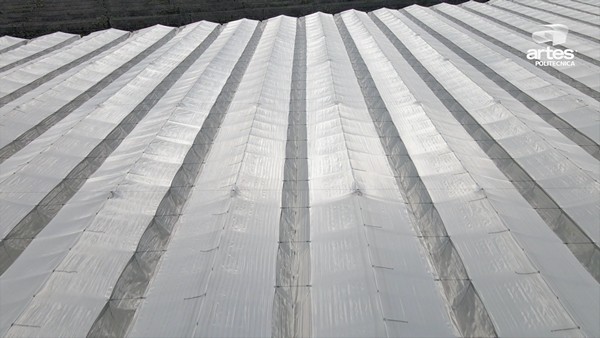 As regards to lighting concerns, we all know that it's essential for cherry trees. For this reason Sanifrutta has always chosen white or crystal nets by matching them with growing and pruning forms which favor the penetration of light inside the orchard. After three years of observation Alberto Boschero confirmed that "under the net we have a couple of days delay for all phenological phases (included fruit ripening). We gain some days for a bigger fruit size".

In the following video we can see in more detail how the light under the net is very diffused. This installation is still made with one layer of Acqua Stop net on the top and sewn sides of anti-insect netting, plus perimetral closure.

At the end of the visit, Sanifrutta technicians underlined the fundamental features of a netting system: first the project and layout, then the correct installation of anchors and their distance, in addition to a good piling and a scrupulous evaluation of the possible breaking points of the whole system, in order to reinforce them.

"Netting systems with such features cannot be improvised; on the contrary, they need to be carefully designed while taking into consideration every critical point". 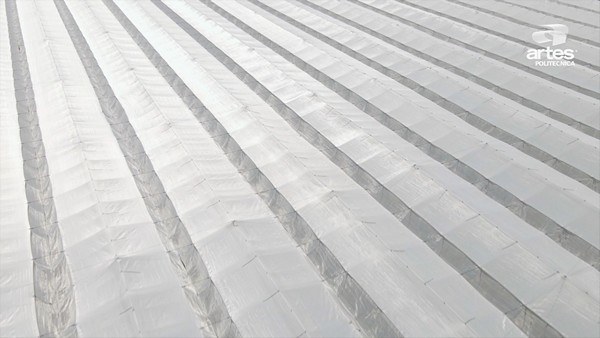 All this evidence supports Artes decision to replace the plastic film with a single layer of anti-rain netting, which on the one hand is high performing in the case of rain or bad weather in general, and on the other is breathable and does not weigh too much on the structure.