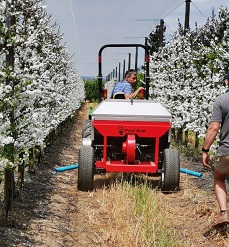 Variable rate application of granular fertilizers in orchards and vineyards has long been an expensive undertaking, but Red Ant Agri Engineering has just launched a more affordable fertilizer spreader, after two years of advanced field trials with some of South Africa’s largest producers, across the country and across tree crops.

Right: the Red Ant spreader in a Paarl plum orchard

It can deliver from as little as 20kg per hectare (for the application of micro-elements or snail bait) to over 300kg per hectare. “We match traditional spreaders on high application rates and we beat them on the low side,” says James Reid of Red Ant Agri Engineering. 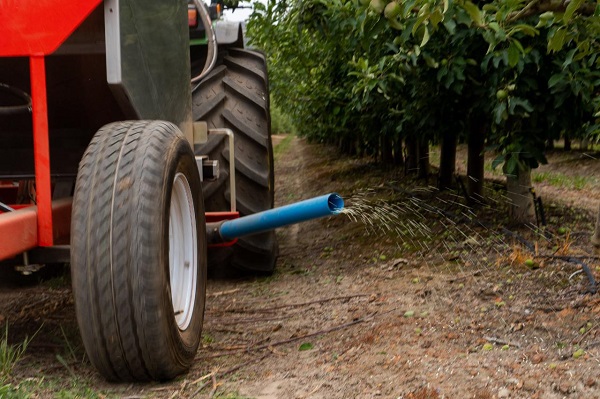 The length of the outlets can be adjusted, along with the wind speed, for accurate deposition on the root zones (photos supplied by Red Ant Agri)

“The spreader is controlled using an Android device and app which not only provides the GPS location but also serves as the storage and communication device while controlling the stepper motors. The sprayer’s position and speed are continuously monitored through GPS, and based on the forward speed of the spreader and the programme loaded to the spreader, the app adjusts how quickly the motors turn to meter out the fertilizer perfectly.

"We can load a map onto the spreader, so that as it drives, it meters out different rates of application,” he says. “From a savings perspective, it results in the optimal efficacy and efficiency of fertilizer use.”

The programme is created on an IoT portal either by importing vegetative indices or soil maps or by creating polygons based on satellite imagery (freely available to Western Cape farmers) and a farmer’s own knowledge of the differences between blocks. An orchard can be divided into as many different zones with different fertilization requirements as necessary. 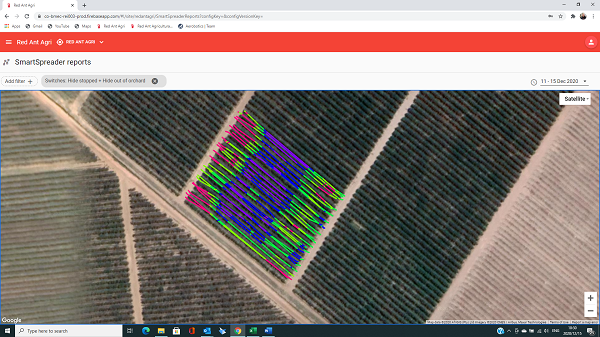 The lines represent rows already visited by the spreader, where fertilizer was deposited according to the differing requirements indicated by the colours (photos supplied by Red Ant Agri)

That programme is then sent either via the cellular network or WiFi to the phone that controls the spreader, which is paired to the spreader via Bluetooth when the operator logs in. He notes that they are using Xiaomi phones which receive twice as many GPS coordinates, allowing a 3m accuracy.

Responsible approach to fertilization
Wind speed, as well as the length and angle of outlet pipes are adjusted to the maturity of the orchard and the radius of the root zone to achieve perfect band placement. The spreader’s progress through the rows of the orchard can be followed in real time.

Their clients are concerned with optimising yield and maximising returns per hectare through precision farming, which is their approach as well, rather than a mere saving on fertilization costs. Their spreader supports a responsible farming approach, James points out: just putting down fertilizer where it is needed. 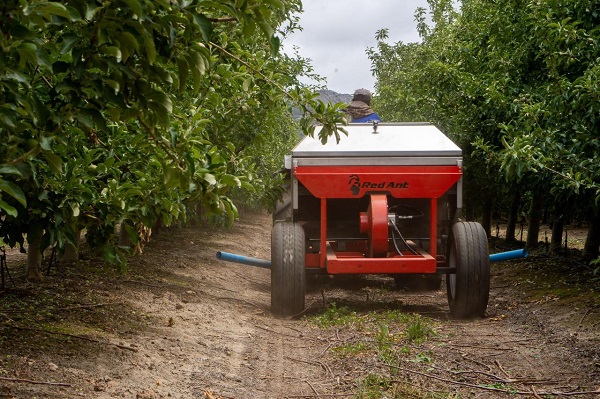 “There is a lot of talk about overfertilization which has three effects: it costs money to put down more fertilizer than necessary, it acidifies soil and adversely affects soil organisms like nematodes and thirdly, if it leaches past those zones into the groundwater, it causes groundwater contamination.”

Smart spreader adds value to data
The smart spreader is eminently suited for use in conjunction with the vegetative indices and soil maps generated by companies like Aerobotics (gathered via drones) and Revolute Systems (via satellite and electromagnetic induction scans). This full integration with such data, employed to automatically programme the spreader, is the aspiration of many farmers.

“For orchards and vineyards this technology has been largely unaffordable, until now,” James says. “An orchard-based variable rate spreader based on open field technology sells for over R300,000 [16,600 euros] for a spreader. Our system works more like a seeder, with 4 metering devices and a venturi type distributor, and it comes in at R170,000 [9,400 euros] excl. VAT.” 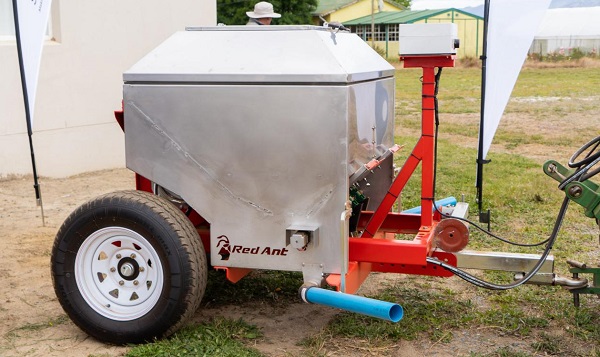 The Ceres-based company manufactures bin on the ground trailers, herbicide booms, orchard platforms, pruning towers, onion harvesters as well as imports of some European equipment like sprayers and mulchers. The company also has an ultrasonic tree detector available as an optional extra to the Smart spreader for orchards where the canopy is smaller than the roots, like date orchards and in young orchards.

Open and closed netting on apples
“The second half of our business is netting and ground mulch. We specialise in European open and closed netting for specifically apples. We’ve also had quite a bit of success on plums with netting that is opened during the pollination phase or during periods of cold unit accumulation."

He continues: "We are entering our second season with the Lumilys reflective mulch from BTT in Belgium which is producing fantastic results on bi-colour apples."

A provisional patent registration of the Red Ant Smart spreader (South African Patent Application No. 2020/06865) has been concluded.