'Demand for pears could be satisfied without any difficulties'

Italian pears prevailed, with Abate Fetel and Santa Maria in the lead and Williams Christ rounding off the ranges. From Turkey, Santa Marias came in almost exclusively. The Netherlands participated mainly with Gute Luise. German Alexander Lucas and Conference supplemented the range.

The supply situation did not change significantly and demand was met without any difficulties. Due to increased cost prices, traders in Frankfurt tried to increase their demands for the Italian offers, but this did not really work out. In Munich, they had more success, so larger Abate Fetels and Santa Mariad became more expensive. The prices of domestic and Belgian goods dropped off in Cologne. 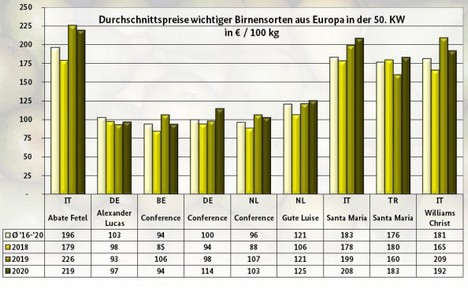 Apples
Business was quiet overall. Thanks to the Advent season, customers increasingly turned to red-cheeked products such as Red Delicious, but their prices still remained mostly steady, or dropped off a little locally.

Table grapes
There was some movement in the product range, as European and Turkish deliveries became increasingly limited, while imports from overseas gained in relevance.

Oranges
In the case of blond oranges, arrivals of Spanish navelina had once again gained speed in terms of volume. Supply and demand were more or less in balance, so that prices mostly remained at the previous levels.

Smaller citrus fruits
Sales were rather quiet in the week after St. Nicholas. Spanish clementines topped everything in terms of volume and their presence grew once again. The demand could not keep up. Therefore, some products saw discounts, although the quality was generally great.

Lemons
Low temperatures, rainy weather and the desire for healthy food were triggers for an improved demand here.

Cauliflower
French and Italian products were predominant; they were available in both 6- and 8-unit presentations. Availability had expanded overall, but still did not fully meet the demand.

Cucumbers
Spanish cucumbers dominated events. Business was mixed and, as a result, prices moved in both directions.

Tomatoes
A very abundant assortment was available, primarily involving the Netherlands, Spain, Belgium and Morocco. The availability expanded. Demand was not as strong, although it had definitely intensified a bit in some places.

Sweet peppers
Business was really uneventful. Supplies generally harmonized with the sales. Prices leveled off fairly quickly and then remained constant in most cases through Friday.