The Scotch Bonnet is the main commercial variety of pepper in the Caribbean, having achieved this status through a process of repeated selection based on aroma, pungency, flavour, yield, and disease and pest tolerance.

Originally cultivated by the Taino Indians, the distinctly Caribbean flavour of the condiment is used to make a variety of value added products such as hot pepper sauce, jerk seasoning, pepper mash, dried pepper, scotch bonnet chocolate truffles, pepper powder, and much more. 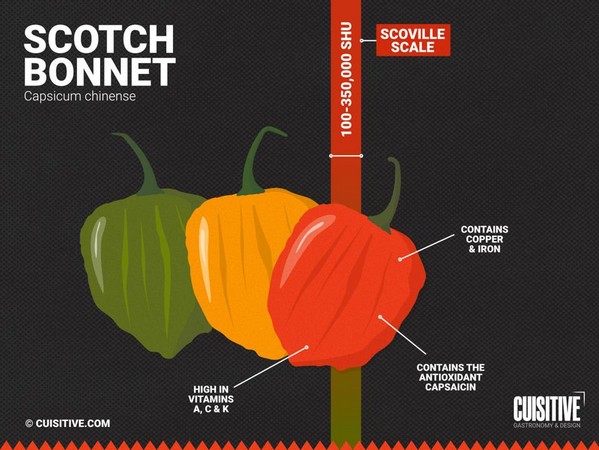 “Scotch Bonnet Peppers are the “back roads” that lead to the same destination,” says Chef Peter Ivey of The Reggae Chefs, of the tear-inducing Caribbean flavour. “They are the roads that your parents told you not to walk down alone at night until you were all grown up.”

According to an article on forbes.com, Jamaica is the biggest player in the regional market, with top agro-processors including Grace, Walkerswood, Spur Tree Spices and Jamaica’s leading pepper sauce producer, Gray’s Pepper Products Limited, with approximately 60 per cent of its products destined for the export market.