The GB potato industry accounts for over 117.46Kha of planted area this year, and is represented by 1,611 growers in 2020. Growers have faced difficult seasons of late. Last season, from a supply point of view with the challenging lifting conditions in 2019/20, and now this season from a demand point of view with supressed levels as a result of the coronavirus pandemic. Our senior analyst Alice took an in-depth look at the recent lockdown and what this means for potato markets. This article aims to cover a seasonal roundup of what has happened so far, as well as commentary on what December may hold for potato markets.

Throughout the calendar year so far, all sectors in potato markets have seen reduced levels of demand. The closure of food-service industry from March to July created a large volume of the then old-crop that had yet to move out of stores according to reports from industry. The quality of which was well enough to continue to move to packing markets until late July. This hit most new-crop markets with prices reported below seasonal averages for freshly lifted supplies.

Production
2020 GB potato production is estimated at 5.37Mt. An increase of 4.1% from last season. The average GB yield is estimated at 46.3t/ha, above a figure of 45.6t/ha last season. Lifting progress was hindered by the heavy rainfall across GB towards the end of August and throughout October. Despite this, harvested area this season has increased by 2.8Kha to 115.92Kha. Increased production is estimated for most sectors although the fresh bags and seed sectors have experienced decline on the year. 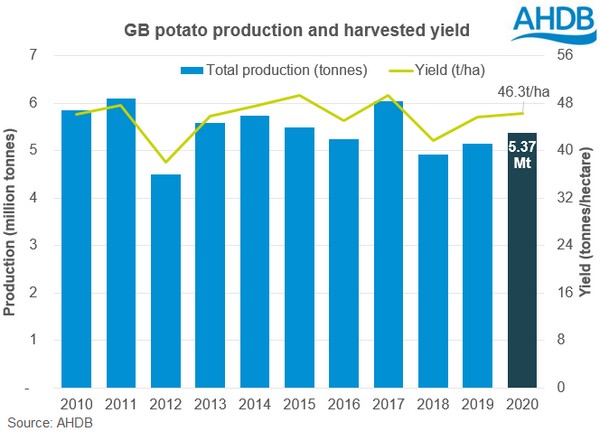 An estimated 96% of the total GB potato area had been lifted by the week ending 10 November. Areas remained in the East and North East of England, following a wet October with the regions receiving 106.1mm of rainfall according to the Met Office. The final lifting report can be found here.

Trade overview
An increasing share of the potato trade (for pre-pack and processing) is becoming on a contracted basis. This is evident in pre-packing markets, seeing year-on-year increases since 2013 when 42.3% of the planted area was allocated for contracted trade. In 2020, this split has increased to an estimated high of 70.8%. In recent seasons, we have seen a greater level of price volatility across free-buy markets, coupled with more frequent weather challenges at harvest, it has warranted a push to mitigate risk from packers and processors. Looking ahead, potential for volatility from the EU exit in the New Year and the increasing risk of weather delays, suggests a tendency for the contracted area to grow.

Consumer Insight
Maris Piper has held its reputation amongst consumers as the nation’s favourite. Conversations with industry indicate Maris Piper is able to achieve a premium in packing markets because of the subsequent consumer demand. In Potato Weekly (w/e 4 December) median prices for Grade 1 Piper were quoted £80/t higher than the Whites equivalent. From a consumer spending point of view, Maris piper accounted for 19.4% of all fresh potato market spend (total non-organic) in the 4 weeks to 1 November.

In the four weeks to 1 November this season, total market spend for fresh potatoes (including organics) grew 1.8% over the same period last season. Interestingly, the volume purchased per buyer over the four week period increased 400g year on year, suggesting consumers are buying more for home meal occasions. We know a preference for more home cooked meals is a trend throughout the coronavirus pandemic as consumers mitigate infection risks.

European situation
Across on the continent, lockdown measures too have affected potato markets. Processors in particular have seen potato product stocks rise, as a result of the slower levels of demand. Any levels of demand present are able to be met by contracted material, leaving free-buy processing supplies unable to move from store. Fresh potato demand is stronger, particularly for retail through wholesale markets in the run up to Christmas.

In parts of the EU, the remainder of the season looks to be well-supplied from a processing quality front. In Belgium, November stock estimates point towards 3.25Mt remaining, around 75.6% of the 2020 production figure according to PCA and Fiwap. Usage figures of 1.05Mt is the second lowest since 2010.

In closing
Lower levels of demand so far this season is likely to have affected stock drawdown levels. With production estimated at a 2.8% increase on last year, the availability of potatoes for most sectors will weigh on prices. Processing markets in particular could be most exposed to this, given the lower quality requirements for some jobs.

The rollout of vaccinations against Covid-19 provides hope for a return to a ‘new normal’ next year. The easing of tiered lockdown measures would enable the foodservice industry to see better levels of footfall and potato markets start to see a recovery in demand levels.