Photographs have emerged of a massive land clearing in Kenya in preparation for the establishment of a commercial avocado farm right inside the wildlife corridor connecting Amboseli National Park and the Chyulu Hills/Tsavo ecosystem.

This has sparked a nationwide uproar with experts detailing that the Kimana wildlife corridor is the only remaining direct route for wildlife to travel between Amboseli and Tsavo West national park.

Local communities were the first to object to the farm but the outcry spread quickly. Following input from a number of stakeholders, as well as evidence of the importance of this wildlife corridor. "How many elephants is an avocado worth" has been the slogan of choice to highlight the plight of the wildlife that are set to be impacted negatively by the farming project. 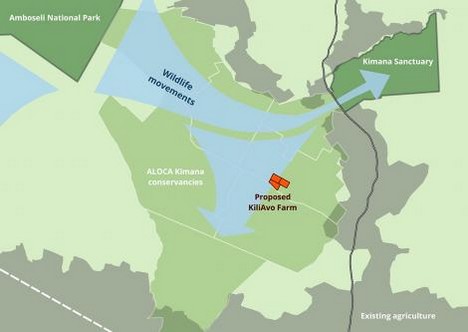 Located at the very heart of the eco-system, one can make out a few man-made structures on the perimeter of the huge chunk of land.
Bulldozers have quickly turned the 180 acres of natural habitat into bare ground primed for avocado farming.

According to environmentalists, the project violates two government-gazetted land-use plans, neither of which allows agriculture on the land that was razed to the ground. This has further raised questions as to whether the fires that have ravaged the Tsavo National Park over the year were engineered to clear land for the private developers.

The case against the private developers is being appealed in the National Environmental Tribunal of Kenya. If the company wins, it’ll open the floodgates to other developers. Both local and foreign developers have reportedly acquired big chunks of land eyeing to set up multi-million agri-business farming enterprises.

According to the adopted and ratified Amboseli Ecosystem Management Plan, the land within the corridor has been zoned off for pastoralism and wildlife, as opposed to the farming that is currently ongoing.

Environmentalists have referred to this act as far more deadly than any poacher pulling a trigger. In September Kenya’s National Environment Management Authority (NEMA) issued a letter of intent to revoke the license for the farm.

However, the developers are set to present their case in which they are expected to justify the viability of the project. Space for wildlife is rapidly shrinking due to human encroachment contributing to decline of wildlife species including the endangered and threatened species.

This is a direct threat to the national wildlife economy and farms in the middle of community conservancies threaten the survival and livelihoods of the communities.

The area is to be irrigated by groundwater from two boreholes. The farm would grow avocadoes, tomatoes, onions, garlic and other vegetables.

The Conservation Alliance of Kenya objected to the project, saying it will block wildlife movement. The umbrella organisation promotes the preservation and management of wildlife and their habitats.