On the occasion of the Vinitech-Sifel Virtual fair, the European network Eurocastanea co-organized a "live" round table on December 3, to which representatives of various chestnut producing countries in the world were invited.

The representatives of China, Japan and Australia had a live chat about the chestnut sector in their countries. The United States and Chile shared pre-recorded videos.

This is how an international exchange network is built, the culminating point of which is the meetings held in September of each year.

The situations in the countries invited differ, but they are all facing great pressure from diseases and devastating insects due to climate change, which is having a great impact. 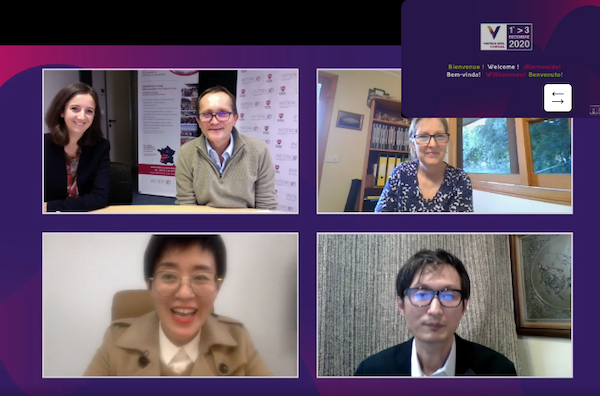 Worthy of note in China is the continuous increase in the production (2010: 1,645,000 t, 2019: 2,000,000 t), especially in the domestic market and Southeast Asia. This country is known for its great product innovation, especially with a recent product, consumed in summer: the "ice chestnut", as they call it, which are roasted and frozen chestnuts.

In Japan, the production is falling due to great competition from Korea and China and low profitability due to global warming.

In Chile, the production is still small but growing (500 t with a forecast of 1,000 t). The country exports to Europe (to Italy and France).

Production in the United States, with its 300 hectares, is not very widespread, but it is growing.

The presence of Eurocastanea in the Vinitech Sifel has also been possible thanks to the collaboration between Interco Nouvelle-Aquitaine, AREFLH and the Interprofessional Union of the Southwest Chestnut, among others. The fair, held virtually this year, has made it possible to showcase the sector's dynamism and the dynamism of its members. The fair has also served to show a video of chestnut producers in the 5 member countries of the network (France, Spain, Italy, Portugal and Austria).

One of Eurocastanea's missions is to promote chestnuts and their exceptional potential. Their derived products are easy to consume thanks to very dynamic innovation. At present, this nut meets the social demand for naturalness, quality and food safety.

All the presentations from the countries cited by Eurocastanea are available upon request.

The next European Chestnut Days will take place in France from September 16 to 18, 2021, in New Aquitaine.