In Chile, farmers have planted many avocado varieties. These are mostly destined for the domestic market. However, Hass avocados now grow on almost 90% of the total 30.143 ha area. Chileans consume about 30% of the avocadoes grown in that country. The harvest is estimated at 220.000 tons. And 145.000 tons of this will be exported. That's assuming the area planted and productivity remain unchanged.

In 2019, there was talk of export growth. This was for both value and volume. But, 2020 is a singular year. Between January and September, total year-on-year exports and values plummeted by 46,1% and 43,3%, respectively.

Consumption
The Chilean market absorbs about 30% of the avocado harvest. That amounts to roughly 65.000 tons per year. Chile imports avocados from Peru, Mexico, and the US too. That's in May and June when local supplies run low. In Chile, people eat almost all their avocados fresh. Only a small quantity goes to the agri-food industry.

New export markets: Australia and South Korea
Initially, only New Zealand had access to the Australian avocado export market. But on 4 August 2020, the Chilean Minister of Agriculture, Antonio Walker, announced that Australia had granted market access for Chilean avocados. Australia imports 15.000 tons of avocados annually. Until now, exclusively from New Zealand. This amended policy means Chile exported 250 tons of avocados to Australia. That was between August and October 2020.

On 23 September 2020, Minister Walker made another announcement. Chilean avocados had gained access to the South Korean market too. That country received its first consignment of avocados from Chile in November. 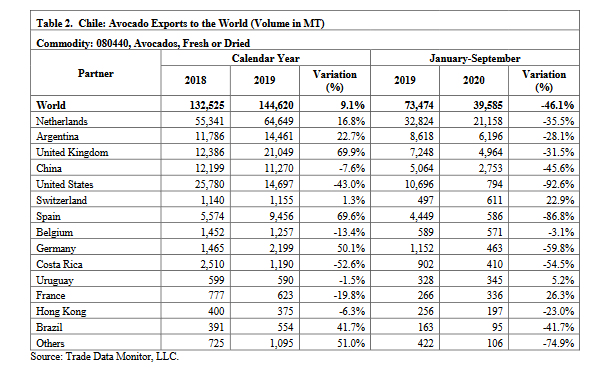 Trade
In 2019, Chile exported 9,1% more avocados than in 2018. This totaled 144.620 tons and was valued at $301 million (more than €248 million). In 2020 (data from January to September), Chilean avocado exports fell by 46.1% in volume and 43.3% in value. Despite the large decrease, the Netherlands remains the most important export market for Chilean avocados. It's followed by Argentina and the UK.