PlantLab, a Dutch company, has opened a new production site in Indianapolis (Indiana). This first-ever ‘Plant Paradise’ in the United States is growing vegetables for the local population at a site that was previously unthinkable - a former battery factory near the city center.

In Indianapolis, PlantLab has entered into a joint venture with Englewood Community Development Corporation, which works to promote the sustainable development of urban corridors. The fresh vegetables are being marketed under the brand name ‘Uplift, good food for purpose’. “Our collaboration allows us to deliver greater value to the population of Indianapolis,” explains Michiel Peters, CEO of PlantLab. “This is also very much in line with our global mission: we not only increase the supply of sustainable and healthy fresh food for local clients but also create local jobs in a completely new sector.”

First harvest
This week, the first herbs and heads of lettuce will be harvested at the 54,000 square feet growing site for delivery to local supermarkets and food service companies. PlantLab is growing various kinds of tomatoes, cucumbers, lettuce, and herbs in Indianapolis. The new location will provide an annual supply of close to 1,000,000 pounds of fresh vegetables as well as jobs for roughly 30-70 persons. Chris Arnold, CEO Uplift: “It tastes like I went out to my backyard garden, picked it, and put it in my bowl.” 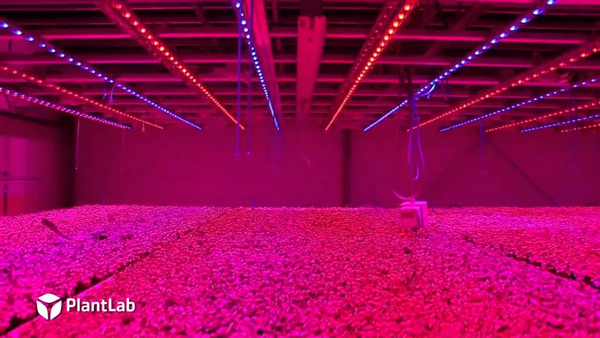 The new production site, the former battery factory of P.R. Mallory, was once the pride of the city, also producing batteries for army vehicles during World War II. After the factory fell into decline in the 1970s, a joint effort by the municipality, NGOs, and businesses breathed new life into the area with the construction of a new campus.

The United States and the Bahamas
Indianapolis is the first American city where the Dutch scale-up PlantLab is opening an indoor production facility. The Bahamas will soon follow. PlantLab’s production sites can be located anywhere in the world, even on barren soil or in urban areas. Thanks to optimized temperature, moisture, and light regulation, the crops grow to their full potential, while at the same time needing only 5% of the water used in conventional farming. Light is provided by specially developed LEDs, which radiate the exact color of light needed by the plant for photosynthesis.

PlantLab has a dedicated R&D center in Den Bosch (the Netherlands), the largest such center in the world for vertical farming, as well as a commercial production site in Amsterdam. PlantLab holds patents for its indoor farming technology in 74 different countries, including the US. Its indoor farming patent applies to the method used for regulating the root/substrate temperature as well as the evaporation and leaf temperature of the crop. Many of the indoor farming systems presently in use may constitute a violation of PlantLab’s intellectual property.

Globally patented technology
Over the last 10 years, PlantLab has worked hard to realize a breakthrough via its extremely efficient and globally patented technology for innovative urban farming. The new technology is already being put into practice at its commercial production site in Amsterdam, the capital of the Netherlands, as well as at this new location in Indianapolis. The breakthrough technology makes it possible to grow day-fresh, healthy, delicious vegetables on a large scale very near to the consumer without the need for any chemical crop control agents. On a production site no bigger than two American football fields, it is now possible to grow enough produce to supply a city of 100,000 residents with 200 g of fresh vegetables each on a daily basis.

This summer, PlantLab received an injection of €20 million of growth capital from De Hoge Dennen Capital. The scale-up intends to use these funds to launch indoor production sites in various locations, including the Netherlands, the United States, and the Bahamas.