Survey on the size of Belgian potato stocks

In Belgium, the Bintje accounts for just 6% of the total national potato yield

For the 24th year in a row, Fiwap, Carah, PCA and Inagro have conducted a survey on the stocks of 208 Belgian potato growers.

1. The Bintje drops from the top

Wallonia
Based on the sowing forecasts for Wallonia for 2020 (43,716 hectares of ware potatoes - SPW figures, PAC declarations), the sampling rate of the telephone survey is of 17.8% of the total area devoted to ​​ware potatoes in Wallonia.

81 growers agreed to participate in the study in Wallonia, with a representative proportion of the areas for each province surveyed (Hainaut 52, Walloon Brabant 10; Namur 11; Liège 8). They really took their time, and some of them were still harvesting their last hectares.

The share of Fontane potatoes continues to increase among the industrial varieties, with an almost 50% growth in the acreage devoted to them. This potato is grown by two-thirds of the producers surveyed and is way ahead of the Innovator (15% of the area, acreage stable) and the Challenger (12%, acreage down).

The acreage devoted to the Bintje (8%) continues to decline and is now closely followed by the Markies (7%), which is growing slowly, but steadily. The Lady Claire acreage remains stable at 2.5% of the total.

All other varieties take less than 0.5% of the area, with a range of new varieties such as the Heraclea, Lady Allicia, Kingsam, Maverick, Risoletto and Tiger. The varieties Royal, Divaa, Victoria, VR808 and Crisper, on the other hand, are no longer part of the product range of the growers interviewed.

In the ranking of varieties intended for fresh marketing, we find the same 5 varieties in the top 5 places, but in a slightly different order: Hansa, Nicola, Jazzy, Alegria and Annabelle. The list also has two new additions: Zen and Bernadette.

According to the survey, about 1.5% of the acreage in Wallonia still had to be harvested by 15 November 2020. This amounts to +/- 600 hectares, of which 0.5% can be considered as definitely lost.

Table 1: Overview of the share of different potato varieties (percentage) grown by producers surveyed in Wallonia in 2020:

Table 2: Distribution per province of the varieties that are part of the study: 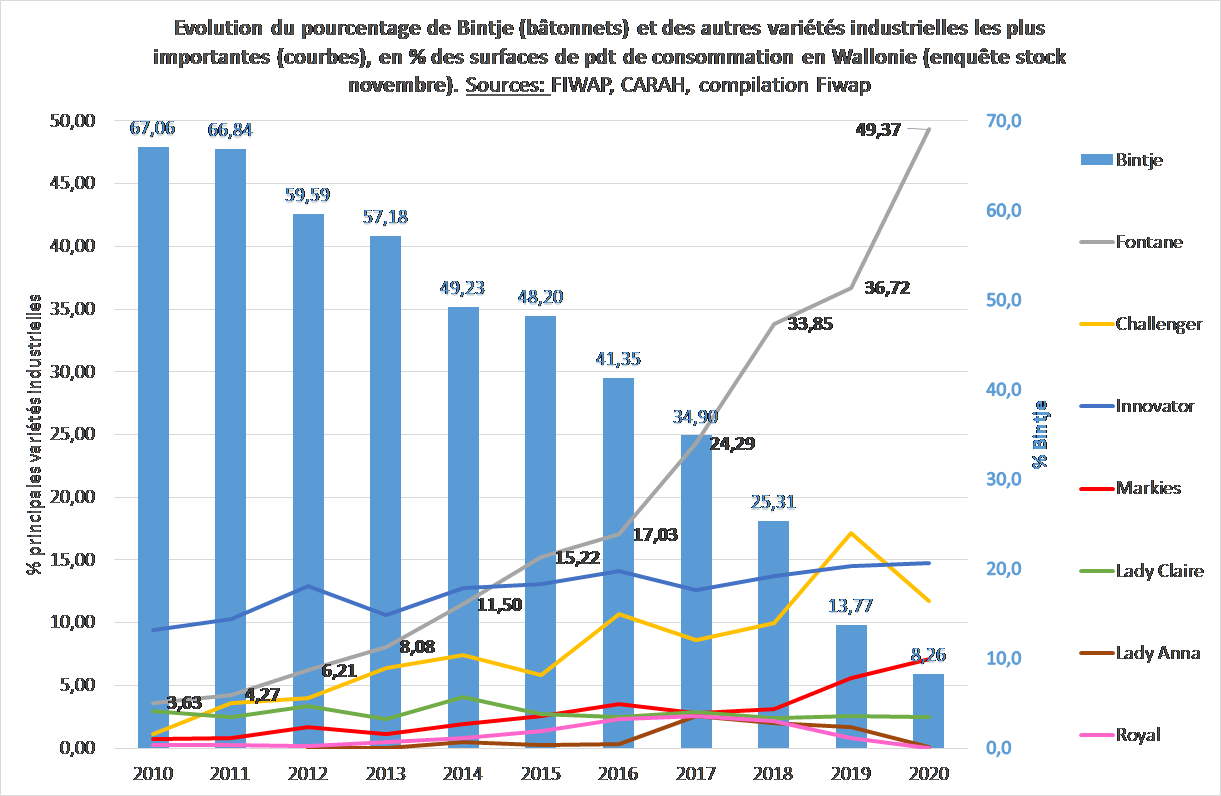 This year's low yields have limited the amount of batches that can delivered outside of a contract. The current situation is reasonably close to that of 2018 (with 80% of batches supplied on the basis of a contract). This year, 70% of the Bintje potatoes, 79% of the Fontane potatoes and 88% of the other storage varieties will be delivered on a contract basis.

Flanders
PCA / Inagro has contacted 127 growers who together account for a total of 4,614 hectares, or 8.6% of the total acreage devoted to ​​ware potatoes. The early potatoes show a very sharp reduction in the acreage, which has been reduced to 7,200 hectares. Last year, this figure exceeded 9,000 hectares. The Amora dominates the segment, ahead of the Premiere.

Table 3: Estimation of the Belgian yield of ware potatoes (including early potatoes): 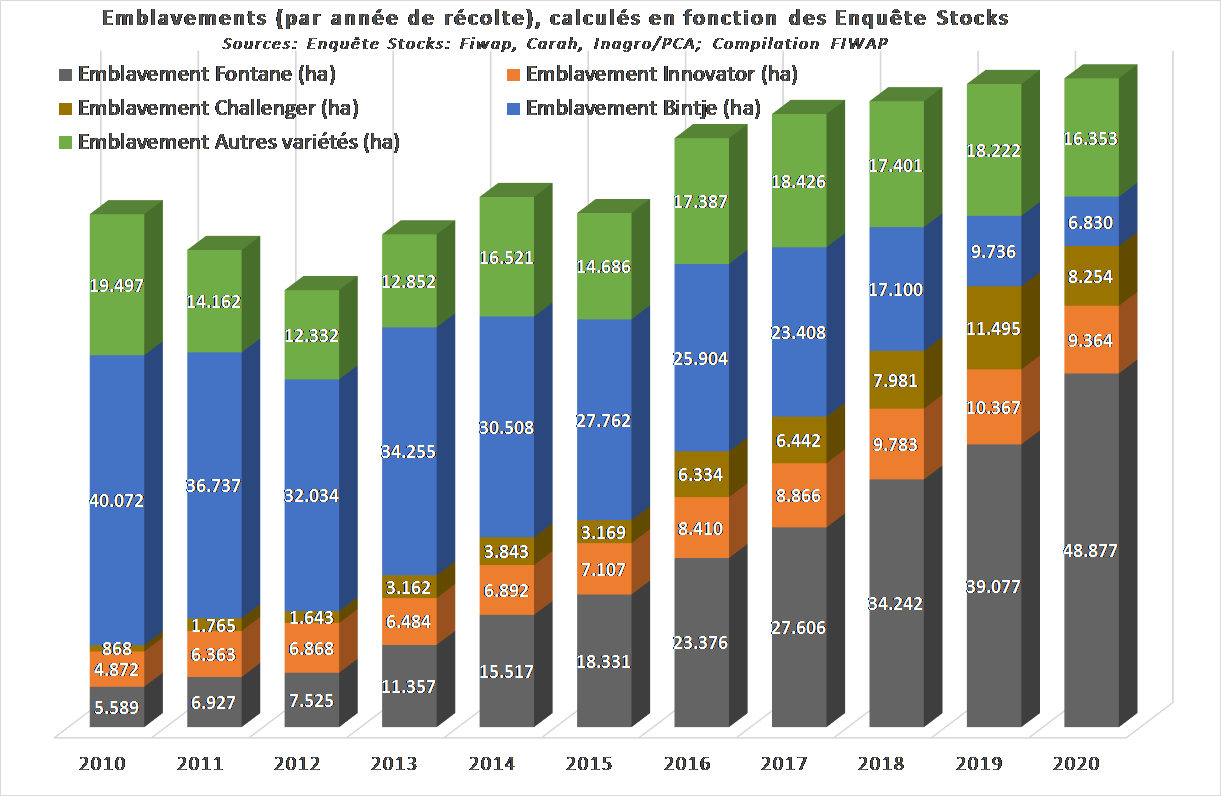 Table 4: Areas, yield and productions in 2019 per variety in Belgium:

Please note: this concerns the gross yield of the potatoes that are sold directly from the field! A fairly low percentage of the potatoes had visible damage (2 to 5%, depending on the variety), but the difficult harvesting conditions (too dry at first, then too wet) may have affected the quality. The loss of storage potatoes due to the difficulties in controlling the germination process without the CIPC sprouting inhibitor could also be greater than normal. We'll know more about that in the coming months.

The results of the study also confirm that there are significant differences between regions, with average yields (all varieties combined) being 5 t/ha higher in Flanders than those in Wallonia. Just like last year, the surfaces included in this year's survey actually already showed this.

The results of the study show that 75% of the storage potatoes that are grown in Belgium are delivered on the basis of a contract. This is a higher percentage than last year's (66%), but comparable to that of 2018 (76%). 72% of Fontane potatoes, 88% of Innovator potatoes, 76% of Challenger potatoes, 66% of Bintje potatoes and an average of 80% of the other varieties are delivered under a contract. All these percentages have increased compared to those of 2019.

On November 15, 2020, the combined Belgian stocks of all varieties were estimated at 3.25 million tons, comparable to those of last year and the average of the past 3 years. This figure represents 80% of the initial gross yield. The part that is delivered on the basis of a contract is large (2.41 million tons). This leaves only 840,000 tons to be delivered outside of a contract.

Since the beginning of the season, approximately 800,000 tons have been marketed, and only 170,000 tons of these have been bought in the free trade (the lowest figure in the last 6 years). Off-contract purchases have clearly been reduced by Covid-19 and difficulties in the harvesting process.

Fontane: The Fontane dominates current stocks, with nearly 2.0 million tons. As this variety is grown on an ever-increasing acreage, stocks are clearly higher than last year's (1.55 million tons) and the average for the past three years (1.42 million tons). 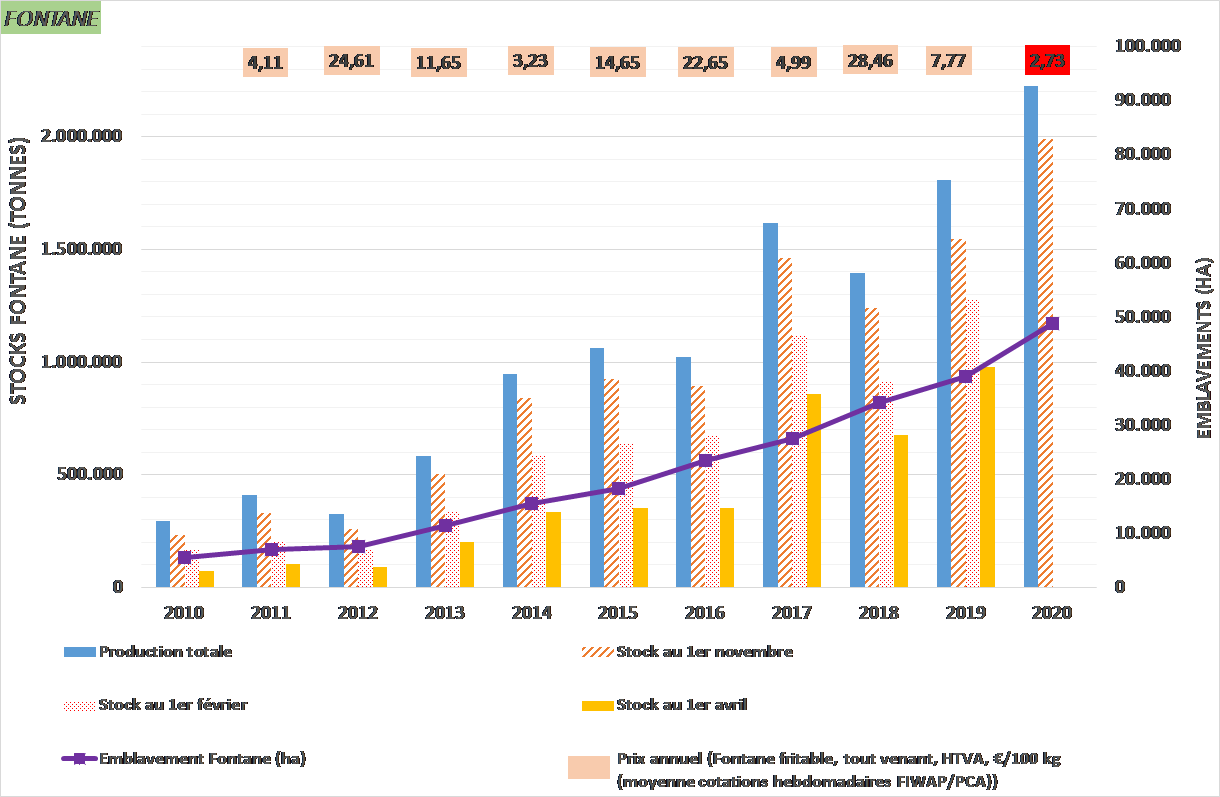 Innovator: According to the results of the survey, there have been 240,000 tons of Innovator potatoes in Belgian warehouses since November 15. Of these, 220,000 tons have been delivered on the basis of a contract and only 20,000 tons off-contract. The stock represents less than 60% of the initial yield, as more than 40% was sold directly from the field in early November. 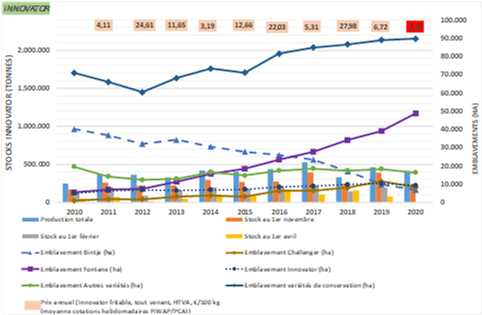 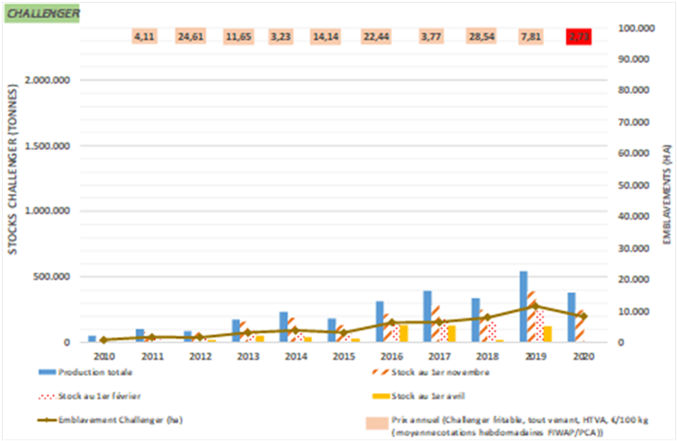 Since the start of the season, reportedly only 40,000 tons of Bintje potatoes have been marketed (15% of the original yield). Last year, this figure stood at 100,000 tons; in 2017, at 190,000 tons, and in 2014, at 330,000 tons. The Bintje market is a niche market in which specialized clients (especially those who use the potatoes to process them into fresh chips or slices) increasingly need to sign contracts with growers and compete for the small batches that can be supplied off-contract. 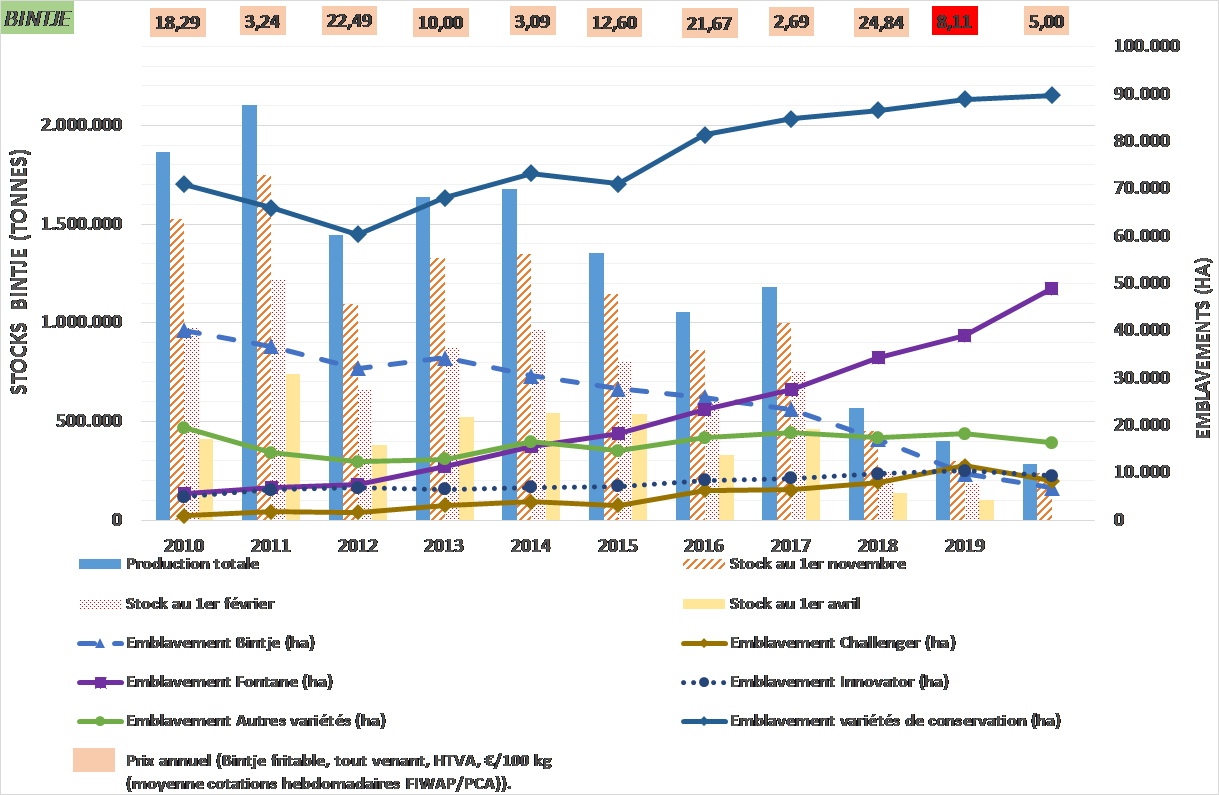 Other varieties (Marquis, Lady Anna, French fries and fresh market varieties): On November 15, their stock was estimated at 540,000 tons; 72% of the initial yield. The volume sold since the start of the harvest is estimated at 210,000 tons. This has been done mainly on a contract basis (170,000 tons). 90% of the current stocks are contracted. This means that only 110,000 tons are delivered off-contract. For these varieties, the acreage has stabilized in recent years and now stands at about 17,000 hectares.

Based on the results of the stock survey conducted on November 15, 2020 by Fiwap, Carah, PCA and Inagro among 208 Belgian potato growers, the gross national yield of ware potatoes (all varieties) amounts to 4.34 million tons.

Looking at the Belgian potato yield, it is clear that the Fontane has become very dominant, with some 2.22 million tons (or more than 50%), while the Bintje represents only 6% of the national yield.

The average yield was 44.7 t/ha; a figure that is ultimately quite good, given the dry weather and the heatwave that took their toll on the crops. The differences between varieties are large, with the Bintje losing ground to the Fontane and Challenger, and the Innovator exactly in between. The results of the study also confirmed that the yields in Flanders were higher than in Wallonia, as in 2019.

On November 10, stocks were estimated at approximately 3.25 million tons. This figure is 600,000 tons above last year's and is also comparable to the average of the past 3 years.

1,090,000 tons of potatoes have already been marketed (including the early varieties). This is slightly less than last year and a similar amount to the average of the past 3 years.

Lastly, the volumes sold under contract are expected to be considerably greater this year. This is good news, given the uncertainties regarding the needs of the markets (now and in the future), which have been disrupted by the pandemic. 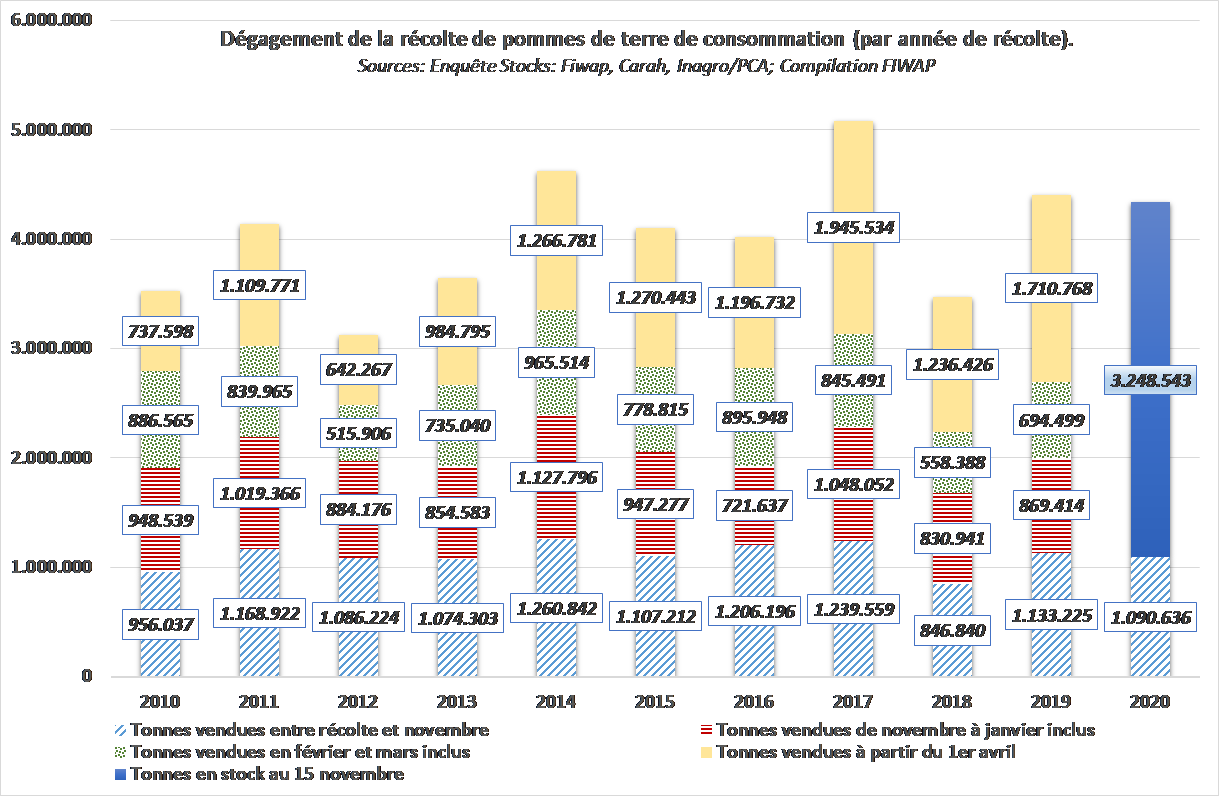