The autumnal weather, cold and rainy, stimulated the demand for small citrus fruits: Business accelerated, certainly towards the weekend. However, the quality of the goods had to be convincing. On the other hand, stocks sometimes had a hard time finding buyers, even with discounts. The availability of clementines expanded marginally: Spanish shipments dominated the market. They were increasingly handled in 2.3 kg crates.

The Greek season started with small deliveries in Frankfurt: The articles were offered in 10 kg wooden crates. Here there were the first Moroccan imports as well, which are to be available starting from week 48 on other markets also. Regarding Satsumas; there, Turkish supplies were predominant. They did not always generate enough demand, so that traders had to lower their prices from time to time. The organoleptic characteristics also left something to be desired: That meant that Berlin traders had to corrected their prices to €1, - per kg. Their offerings tasted exquisitely, but their peels were simply to light. Mandarins had completely left the market. 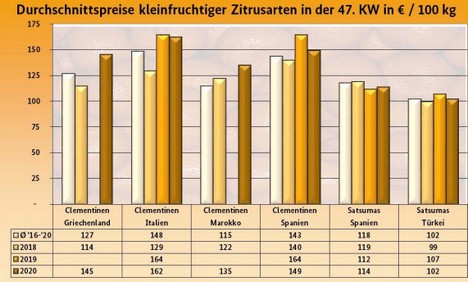 Apples
Things were quite quiet here. With regard to the assortment and the prices, nothing significant happened, since the supply was sufficiently adjusted to the demand.

Pears
The sales were not particularly exciting with regards to pears. The demand could be satisfied without any difficulties, although in general availability was, all in all, somewhat limited.

Table grapes
There was some movement in the product range, as European shipments were limited, while overseas deliveries were seen to increase.

Oranges
Fruits coming in from South Africa, that had been predominant up until this point, lost a lot of their importance: Valencia Late, Midknight and Delta Seedless disappeared from some places and their organoleptic characteristics were not completely convincing.

Lemons
Spanish Primofiori dominated the market, more so than Turkish Enterdonato. Deliveries from South Africa came in only sporadically. The cool weather fanned the demand, which increased somewhat.

Bananas
The level of supply and demand rarely correlated really well. In these cases, prices were at the level of the previous week. In general, business had decelerated a little due to limited demand.

Cauliflower
Local offers usually formed the basis of the assortment. The French and Italian seasons had started. Deliveries from the Netherlands, Belgium and Spain had a completing character.

Lettuce
The effects of Covid-19 were particularly noticeable in this sector, as restaurants and caterers did not make a big dent by buying the usual quantities. Iceberg lettuce availability increased, but demand for this product did not.

Cucumbers
The Spanish cucumbers again expanded their presence, which caused problems for those sellers that saw a limited demand: There had to be price concessions if they did not want to end up with risky stocks.

Tomatoes
A quite extensive and varied range of goods met with an unexcited and calm demand. The supply of goods had increased; panicle offers in particular gained in relevance. The presence of cherry tomatoes increased.

Sweet peppers
The Spanish batches were sometimes too unevenly sorted or had a divergent quality, so a wide price range was established for them. In general, the prices tended to go down.