Truck drivers on South African roads are again being targeted by a shadowy group that professes xenophobic aims but in reality targets trucks indiscriminately.

In the recent spate of attacks concentrated in the east of the country, often close to the Mpumalanga coal fields and the N3 highway, one truck driver has been killed and another is in a critical condition.

SA Trucker, a trucker-run website has published a chilling guide called 'Truck driver's guide to surviving a petrol bomb attack', advising truck drivers to run for their lives when the petrol-filled bottle breaks inside the truck. 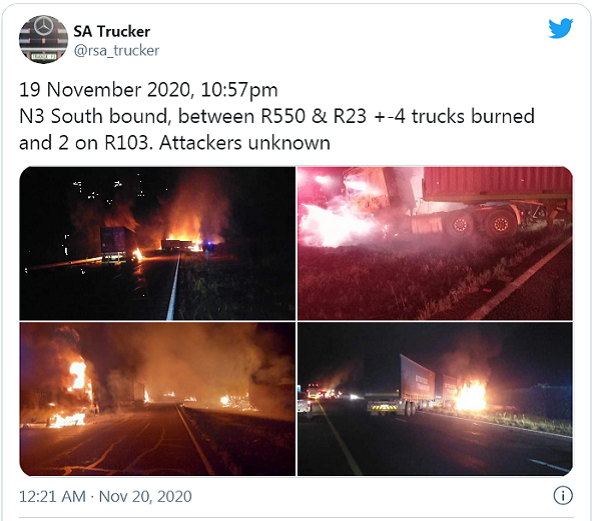 Most attacks take place at night, involving petrol bombs, but this morning's attack in Gauteng occurred at daylight.

Armed attackers force truck drivers off the road, usually allowing the drivers to flee before setting the vehicle alight. Truck drivers have been cautioned to be "extra vigilant" on the roads. The South African Police Service say they prevented a similar attack last night in KwaZulu-Natal, but they appeal for more information from communities.

"We don't have the capacity to line every inch of the highway," Colonel Brenda Muridili of the police service told a radio station. "And some of the attacks last week didn't even occur on the highway but on smaller roads."

Fresh produce logistics providers have told FreshPlaza that they haven't been affected, other than parking trucks in Johannesburg and Durban for a day. Like everyone in the road freight sector they are deeply concerned.

Gavin Kelly, CEO of the Road Freight Association, this morning called the attacks "a major hammer blow" to the economy.

"They are fast becoming a terrorist group" 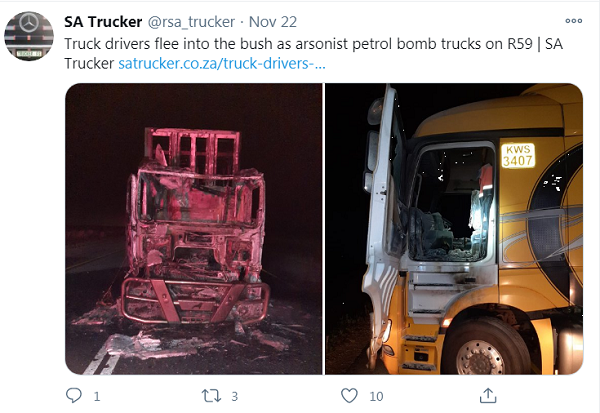 Previous violence against trucks, ostensibly in protest at the employment of non-South Africans, was done in the name of the All Africa Truck Drivers Forum (ATDF), but this time no group has taken responsibility, something which has never happened before (although the ATDF did, apparently, celebrate the attacks in social media), notes SA Trucker, a trucker-run media outlet.

"They are fast becoming a terrorist group right in front of our eyes. Motive - chase all foreigners from the trucking industry and other sectors as well," says a truck driver who has had to wait in Cape Town for a number of days because of the unsafe conditions along the route. "The attacks are random, do you think they care?"

The industry sent a letter to Pres Cyril Ramaphosa who has condemned the "mindless and bloody lawlessness with which the road freight industry is being targeted". 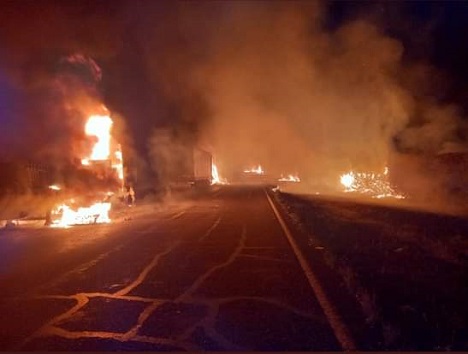 However, notes Kelly, eighteen months ago the Minister of Police Bheki Cele referred to these attacks as "economic sabotage" which would be dealt with; as yet there have been very few arrests.

Attacks against truck drivers on South African roads have become a regular occurrence, as reported on last year and this year by FreshPlaza.