Ready-to-eat beet brand, Love Beets USA, is celebrating its 10-year anniversary this month. The company took what was formerly thought of as a polarizing vegetable and created tasty, modern, and versatile offerings that revitalized how Americans view beets. 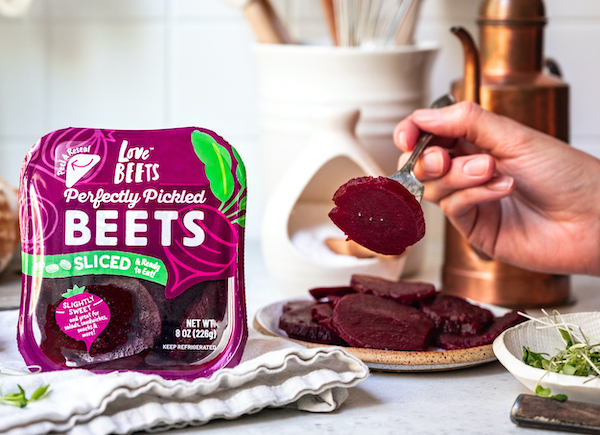 Love Beets began as a true labor of love by husband-and-wife team, Guy and Katherine Shropshire. Recognizing there was a gap in the U.S. market for tasty, ready-to-eat beet options, they debuted their family’s favorite recipes at the 2010 Fancy Food Show. The response was overwhelmingly positive and virtually everyone who tasted their beets said they, “love beets!”

Though they felt it could be hard to overcome the initial perception of “grandma’s beets” and antiquated canned beets in the U.S., after witnessing the excitement and reaction to their products at that first show, Shropshire said he never doubted the potential of Love Beets.

“It’s a real-life example of success by joining a genuinely great product together with talented, super hard-working people,” he said.

Consumers can now enjoy Love Beets items in more than 15,000 retail locations across the country. Distribution has expanded to many prominent retail partners, including Costco, Whole Foods, Kroger, Wegmans, Sprouts, Target, and many more.

As beets' biggest sponsor, Love Beets has had a substantial positive impact on the perception of beets nationwide, and they’ve made a name for themselves in both the produce industry and larger natural foods CPG space.

“We’ve been able to create a well-known and well-loved brand identity within the produce space, a department full of commodity and private label offerings with a lot of competition for shelf space,” said General Manager, George Shropshire.

“Beyond that accomplishment, we’ve also worked hard to grow as a U.S.-grown and produced company. We’re proud of our made in the USA label that stands out among our competitors.”

Looking forward, Love Beets aims to drive growth through innovation, sustainability, and continuing to drive trial and consumption. They will continue to provide consumers with healthy and convenient options that taste good, while working on an enhanced brand identity with updates to packaging and the introduction of new flavor offerings within their marinated baby beet line.

“In addition to growing our product lines and distribution, the last decade has also been full of growth with our retail partners, farmers, consumers, and our team,” said George Shropshire. “We’re so thankful to those who have been a part of our journey and cannot wait for the next 10 years here at Love Beets.”