It is cool in the hall at the Duisburg wholesale market. At 5 degrees Celsius, almost everything you can imagine in the field of fruit and vegetables is stored here: Truffles, purple potatoes, mini garlic, kumquats and numerous local fruits and vegetables as well as herbs. Pumpkins in summer and strawberries in winter are not uncommon here.

"We can fulfill all our customers' wishes," says Maria Röskes, owner of Weitz Frischdienst in an interview with the Ruhr-Niederrhein trade association. While she talks, she eagerly types on her computer keyboard. Maria Röskes also wears a jacket and winter shoes in summer. She is used to it - she came here as a child. "My parents were fruit and vegetable traders," says Röskes. They founded Weitz Frischdienst in 1986, and three years later the company became a member of the Ruhr-Niederrhein Business Association. 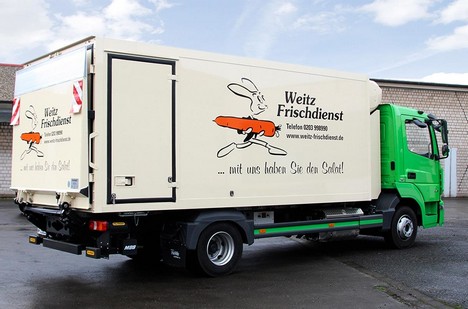 Vegetables instead of numbers
Maria Röskes herself actually wanted to become a tax consultant, but numbers were not her thing. Instead, she took over her parents' business -together with her brother Raymund Weitz- and developed it further. Weitz Frischdienst is mainly active in the catering trade. If you enjoy a caipirinha in the cocktail bars in Duisburg and the surrounding area, you can almost be sure that the limes used come from the halls of the Weitz Frischdienst. The restaurants and hotels in the surrounding area are also happy to be supplied by the specialist retailer. A safe business, but not in times of the Corona pandemic. "Orders fell by 70 percent within a very short time," recalls Röskes, who was born in Düsseldorf.

Boxes according to customer requirements
When one restaurant closed, and then another and another, she had an idea: fruit and vegetable crates for private consumers, delivered contact-free. A successful idea; soon the first crates were sold, all according to the customers' wishes. The service area comprises of the cities of Düsseldorf, Duisburg, Mülheim an der Ruhr and Ratingen. The business model is so successful that the Weitz Frischdienst intends to maintains it.

Measurable success
An important prerequisite for the sale of the popular boxes was the revision of the homepage as well as setting up a web store. Tasks that Maria Röske's son Christopher took over. He studies software engineering in Berlin. Within the framework of a special program at his university, he founded the Kant Solutions company, together with fellow student Marcus Daftari. The two creative minds design online stores and websites for companies.

"We set up the first online store for a store selling haute couture hats in Berlin," recalls Christopher Röskes. In the meantime, the two founders can already look back on a long list of references. And the success is measurable: "Within a very short time, my mother had 600 new customers," Röskes says happily.

New online store and expanded product range
And not only the online store is new. Maria Röskes plans to add new products to the range as well: honey, vinegar and oil as well as fruit juices. "Then we can offer whole gift baskets," the businesswoman says. She would also like to attract even more corporate customers. As part of company health management, many companies provide their employees with fruit baskets in the kitchen or canteen - these could in future come from Weitz Frischdienst.

Seamless traceability
"Through our long-standing cooperation with local farmers, we not only support our region, but we can also trace the exact origin of the products. We know which farmers in Europe harvest their products to have the best quality, how to transport them carefully, prepare them gently by hand or with special machines, and deliver them crisp and fresh to the customer without wasting any time," says Röskes. With a smile on her face, she adds: "We know how the game is played."