Cherries have been grown in Scotland for quite a few years but are only now becoming really commercially available. One grower Stead Nicolle, started growing cherries back in 2010 as part of his thesis using the Upright Fruiting Offshoot (UFO) system developed by Dr. Matt Whiting of Washington State University.

While still growing on a small scale, Stead has started the second phase of his project consisting of a block of 20 tunnels, 1280 trees, which can be easily managed by one person, due the efficiency of the UFO system. 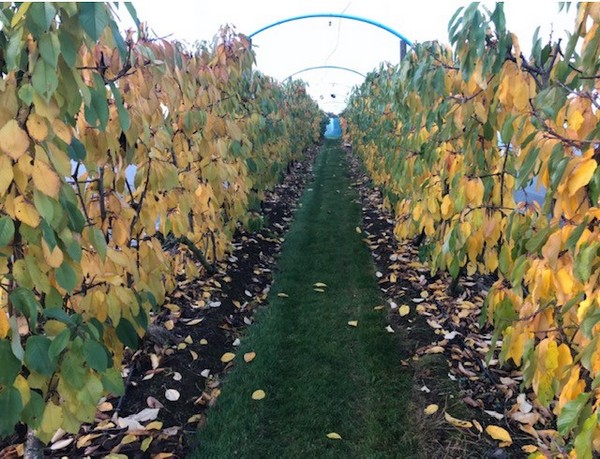 “In the first trial I planted eight different varieties on 3 different rootstocks. Five varieties performed well, the remainder were grubbed and replanted. I now have full production in some of the tunnels and I’m very happy with the yields that these trees have been producing.” 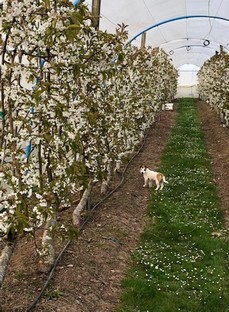 Situated at Rosehill Farm on the east coast of Angus, the biggest issue is the weather, especially when you have uninsurable poly tunnels. “The tunnels I use are smaller than most standard commercial ones currently in use, creating a sturdier structure. The great advantage to our situation here are the light levels, these are enhanced by the reflection off the sea. This gives us the ability to produce super sweet cherries. Our proximity to the sea does have drawbacks when summer fogs roll in, creating spikes in botrytis and fruit splitting due to the plants inability to lose excess moisture. Our latitude allows us to plant late season varieties and target the end of season market when world supplies are drying up.”

Stead is not just concerned with particular varieties but is also looking at soil quality and he has started incorporating bio-char produced from annually pruned off cuts back into the soils. “The bio-char allows me to recycle our orchard waste without risk of reintroducing disease. Within the soil it acts as a coral reef for beneficial micro-organisms and fungi, we are also effectively taking carbon out the atmosphere and storing it indefinitely in the soil. I believe the biology of the soil is as important, if not more important than its chemistry, often too much focus is placed on EC levels." 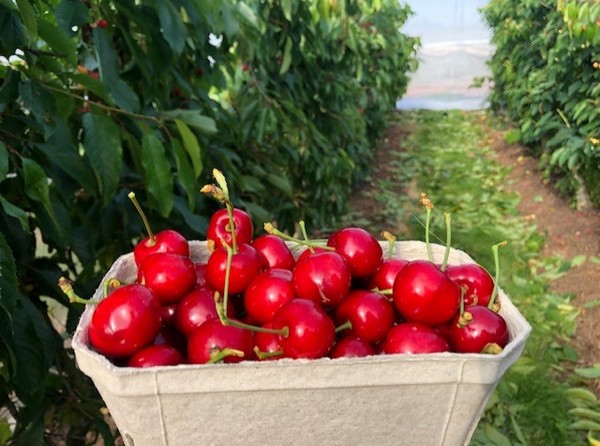 Stead admits that is it not easy to turn a profit growing cherries on such a small scale and continues to supply irrigation components to other Scottish fruit growers as a second income, nevertheless he has decided to increase his production and invested in more trees.

“It is a big investment, firstly buying and constructing the polytunnels and secondly buying the cherry trees. You need to make sure you are buying a variety which is going to work for your particular situation and environment as it is a long-term commitment.”

At the moment he is selling the cherries through local small shops and greengrocers and will look at other outlets when volumes allow.