Movement of Brussels sprouts are feeling the lack of foodservice business.

“The market as a whole is slightly oversupplied. But mostly because the foodservice industry is non-existent right now. All the sprouts that are normally pushed into different markets—food service, industrial use, etc.—are all being moved through the fresh market system,” says Tony Wisdom of Skagit Valley Farms and Valley Pride Sales in Burlington, WA.

He notes that supplies currently come from Washington, California and some from British Columbia and Quebec. “I don’t think there’s a lot coming from Mexico right now,” says Wisdom. “The volumes are pretty normal—maybe a few more acres were planted this year just because of the popularity of Brussels sprouts. But I don’t know how significant that might have been.

Meanwhile demand is normal and continues to grow as it has been for the last few years. “It’s clearly a popular vegetable and gaining in popularity. The fresh market is good but there’s just no foodservice,” says Wisdom. “Brussels sprouts have historically been a good mover in the foodservice industry in restaurants, conventions, etc. especially over the wintertime.” 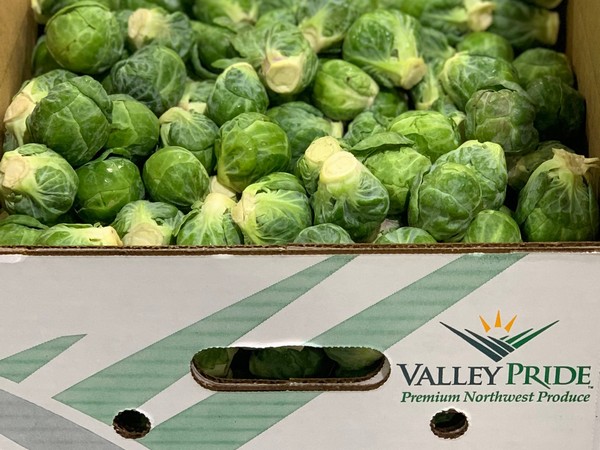 Smaller Thanksgiving effect?
That said, the push towards holding smaller gatherings this Thanksgiving may just boost the consumption of the vegetable. “My opinion was that there’d be more people buying more sprouts because there are going to be more households cooking their own meals. Instead of 20 people going to grandma’s house and her cooking five lbs. of sprouts, there are four households and each one is cooking three lbs. of sprouts for example. We’ll see though.”

At the same time, there are some other changes in consumption of sprouts. “We’re seeing an increase in the popularity of purple sprouts. It ebbs and flows but I’m hoping more people will catch onto these,” says Wisdom. “It’s slightly sweeter tasting and it’s very difficult to grow. It’s a super long season so you can’t just do them everywhere.”

The vegetable also seems to be moving more into the value-added arena. “So instead of bulk sprouts, we’re seeing more of a demand for items in a bag, grab and go style. I think that trend will continue now, especially with consumer sensitivities to food security,” says Wisdom.

As for pricing, Wisdom notes it was pretty soft to start but is slowly firming up as the season moves further along. “It’s lower than it has been for sure. My guess is that the constriction in the supply channels is creating a false oversupply, which can create pricing pressure. Demand remains strong. It is a great vegetable,” says Wisdom.