Native cauliflowers dominated the market. The first Spanish batches arrived: In Frankfurt they cost only €5 to 6 per box of six, which meant they sold easily. Belgian and Dutch lots completed the market. In Berlin there were the last Polish items, but they were not entirely convincing in terms of quality and therefore a large price range was established. Italian and French deliveries were still missing. Nevertheless, the demand could generally be satisfied.

The demand had improved in some areas. Sometimes, however, it turned out to be quite manageable. The prices did not change significantly. In Frankfurt, they dropped due to the competition of Spanish goods. In Hamburg, prices also fell slightly overall. In Munich, traders were able to increase their demands at the beginning of the week and subsequently confirm their prices. 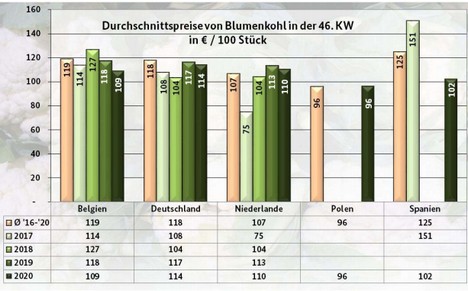 Apples
Local products played the leading role in the varied offer. The availability often harmonized with the sales. These had, however, been slightly limited locally. The prices mostly remained at the previous levels.

Pears
All in all, marketing was slow. The quality was generally convincing and the distributors rarely needed to modify their prices. Locally, Italian fruit was cheaper, adapting to the demand.

Table grapes
Italian offers continued to dominate business, which had slowed down a little. In addition, stocks from the retail trade impaired the placement of regular articles in the store. Occasionally, the prices of some batches dropped.

Small citrus fruits
The autumnal weather was supposed to improve demand, but in some places customers were reluctant to buy. The reasons for this were qualitative uncertainties, high prices and returns from the retail trade. Discounts were intended to accelerate sales.

Lemons
The demand was not particularly strong, although it grew somewhat thanks to the low temperatures. However, the supply was too large. The sellers therefore often had to reduce their prices.

Bananas
On the one hand, supply and demand were roughly in balance. This resulted in unchanged prices. On the other hand, business also slowed down frequently. As a result, the prices of various brands had to be reduced a little, here and there.

Lettuce
Spain had an almost monopoly on iceberg lettuce. The sales possibilities were limited. Covid 19 played just as much a role as too low per capita weights. Discounts were necessary to improve sales.

Cucumbers
Spanish cucumbers dominated. They were noticeably cheaper than the competition from the Netherlands, Belgium and Germany. That meant prices dropped. Small cucumbers saw their prices go up here and there.

Tomatoes
A very extensive assortment was available. No clear line could be seen in the marketing. That meant that, depending on the location, prices developed quite differently.