Chinese potato acreage to grow by 0.4%/year in the next decade

China's 2020/2021 potato sales season runs from September to August. That harvest is estimated at 99 million tons. That's a three percent increase compared to the estimated 96 million tons grown in 2019/2020.

This increase is a result of a rise in Chinese potato production. That's being fuelled not only by higher potato prices. There are also favorable weather conditions in the main potato growing provinces. These are in northwest and southwest China. Northeastern China was, however, hit by heavy rainfall and typhoons in early September 2020. That caused significant delays in the potato harvest in that region.

In 2019, average wholesale potato prices were CN¥2,4/kg (€0,26/kg). That's about 11% more than the previous year, and the highest in six years. According to experts, there are two reasons for this. Firstly, Chinese export vegetable prices increased across the board. And the quality of potato farming increased in that country.

Chinese potato acreage should increase by an average of 0,4% per year for the next decade. That's according to the China Agricultural Outlook Report 2020. It states that potatoes are an important crop for improving growers' income. That's especially true for the less developed hilly areas. 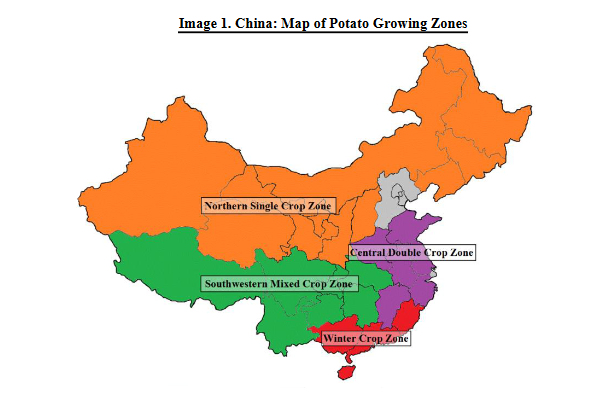 Inner Mongolia, Gansu, Sichuan, Guizhou, and Yunnan are the primary potatoes growing provinces. They account for almost 60% of the total yield. There are four main potato growing areas in China. These are the northern single crop zone, the southwest mixed crop zone, the central double-crop zone, and the winter crop zone.