Hurricane Iota made landfall on the Atlantic side of Nicaragua on the evening of November 16th, only 15 miles south of where Hurricane Eta made landfall two weeks ago. Hurricane Iota landed at a Category 4 storm, though it has since been downgraded to a Tropical Storm and is moving along the coastline toward the west.

Effect on Nicaragua’s mango production still unclear
Mangoes, one of Nicaragua’s main crops for produce exports, are currently in the blooming stage and will be ready for harvest in the early spring. Walter Hoffmann of CarbAmericas shares: “Our mangoes are grown on the pacific side of the Nicaragua, and it’s too early to say if there will be any damage. We are waiting to find out what phase of the bloom the crop is at, and how much, if any, bloom drop there might be.”

As the storm moves throughout the country, the rainfall is substantial. “We don’t know yet how much water will be dropped by the storm as it’s still traveling through the region. Hurricane Eta dropped anywhere between 20-30+ inches of rain in several areas, but for Hurricane Iota it remains to be seen which regions will be hit hardest by the rainfall,” Hoffmann explains. According to the National Hurricane Center, the storm is expected to bring between 10-20 inches of rain, with a maximum of 30 inches in certain isolated regions, to Northern Nicaragua, Honduras, Southeastern and Central Guatemala, and Southern Belize. 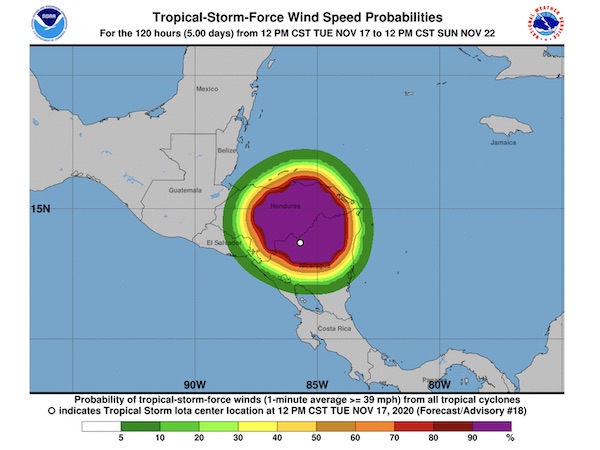 Transportation and logistics disrupted
The entire region is still recovering from the damage of Hurricane Eta, which damaged the countries’ infrastructure and brought rain and wind damage. Hurricane Iota is expected to bring similar effects. In Guatemala, where CarbAmericas works with growers for sugar snaps and snow peas, the ports will be closing in preparation for the new hurricane. Hoffmann says: “The ports closed right before Hurricane Eta hit, but we were able to get a shipment out this past weekend. Now, the port will close again as Hurricane Iota approaches, so we’ll likely miss another shipment because of that. But we’re hopeful we can get going again soon.”

The sugar snap and snow pea growers in Guatemala are seeing some effects from the rainfall caused by Hurricane Eta. “The rainfall from Hurricane Eta has brought some flooding in low areas and some landslides at higher elevations in Guatemala. This has disrupted ground transportation from the farms and packing houses to the port. With all the additional moisture, the farmers are expecting to have lower yields for the next few weeks,” Hoffmann concludes.

Storm expected to dissipate today, November 18th
As of Tuesday evening, November 17th, the storm was moving westward at 12 mph with winds of up to 55 mph. National Hurricane Center predicts that the hurricane will cross through Honduras and dissipate near El Salvador today, Wednesday November 18th. However, another tropical wave is forming in the same region, which, according to CNN, currently has a 30% chance of developing into a storm that would head for Central America once again.