Mexican apple, pear, and grape production are facing challenges in the 2020/2021 sales season. That's due to adverse weather conditions. It's estimated that apple production will fall by 11% compared to the previous year.

Grape production is also expected to be lower due to frost damage. Mexican pear production is expected to decline for the third consecutive year. That's mainly due to three things - low returns, and a lack of investment and support for this sector.

Apples are grown in more than 20 Mexican states. Chihuahua accounts for 56% of the total acreage. This state has seen consistent growth over the last decade. Technologically advanced farmers are creating higher-density orchards from existing ones and planting new areas.

Production is likely to increase over the next five years as new trees start to bear fruit. High-density production accounts for about 30% of Chihuahua's planted area. Farmers cultivate the rest in more traditional orchards, with 350 to 400 trees per hectare. 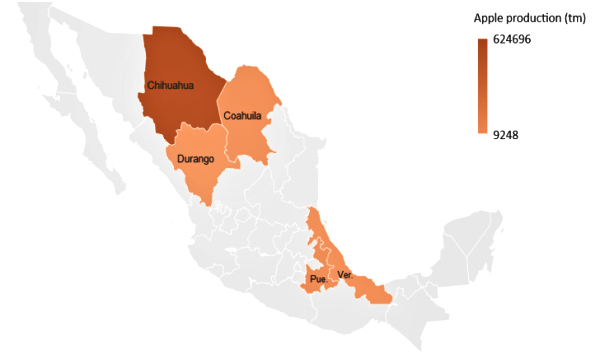 Golden Delicious planting has increased in recent years. That's due to the favorable weather conditions. There's also a high domestic demand for the variety. Currently, 67% of the planted area is dedicated to this variety and 31% to Red Delicious.

Imports of apples from the US have declined compared to last year. That's primarily because of high prices.

Mexicans are price-sensitive fruit consumers. And apple, pear, and grape consumption is generally skewed towards medium to high-income consumers. Sources suggest that consumer behavior during the COVID-19 pandemic has shifted.

It has moved towards more fresh fruit and vegetables being eaten. Ongoing economic and purchasing power instability may, however, depress apple, pear, and grape consumption in the coming months.