The Ottawa Agricultural Affairs Bureau (FAS / Ottawa) forecasts 5% growth in Canadian apple production in the 2020/21 marketing season, despite some growing and labour challenges.

More than 90% of Canadian apple production is concentrated in British Columbia, Ontario and Quebec. Although the weather in 2019/20 presented many challenges for the Eastern Canadian crop, conditions for the 2020/21 crop were more favourable. Despite the drought in the summer, irrigation was done in time to deliver a good quality crop in size and colour in Ontario. Quebec also reports a strong crop. In British Columbia, hail damage in the spring has affected crop quality. Smoke from wildfires along the US West Coast has affected the colour of some varieties. 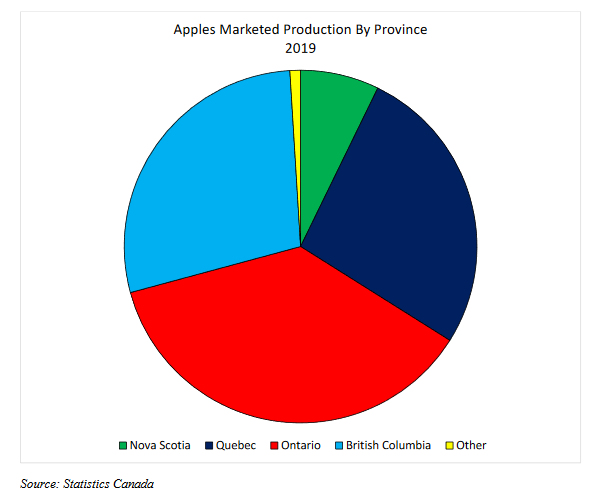 Provinces along Canada's coast suffered from summer drought, which is said to have reduced apple production. Despite these challenges, however, early estimates point to an overall higher apple yield in 2020/21 compared to last year. The harvest is forecast to be higher in 2020/21 than in 2019/20.

FAS / Ottawa predicts a slight increase in the cultivated area in 2020/21 compared to 2019/20, as more Honeycrisp, Gala and other premium varieties are planted.

Canadian apple growers have faced labour challenges associated with Covid-19. Spring maintenance of the orchards, such as thinning and pruning, was negatively impacted by the reduced temporary foreign labour force in Canada due to travel restrictions introduced in mid-March. At the urging of the apple industry, the Canadian government eventually designated apple cultivation as essential, although workers still had to observe a mandatory 14-day quarantine upon arrival in the country.

Labour shortages persisted into harvest time, which may have had a negative impact on the actual yield of the apple crop, despite strong estimates of production. This problem is said to be most pressing in British Columbia, which has grappled with labour shortages.