Enzo Rametta, an expert in this field

"The artichoke season in Sicily started 10 days ago and the conditions were good. Also the crops that still need to be harvested seem to be optimal and have only minor problems. It would be nice to have some rain, but on the whole we can' t complain about the cultivation", said grower Enzo Rametta from the east side of Sicily. 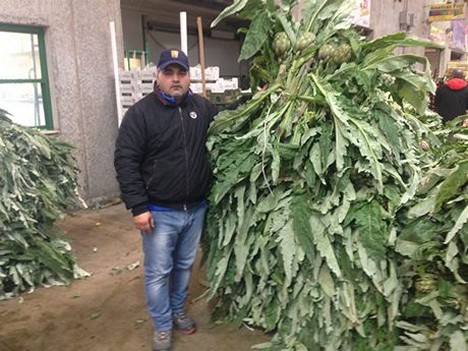 "What we're a little worried about are the temperatures. These are quite high for the time of year and do not benefit consumption. The artichoke is a crop that is traditionally eaten in the cold months and if temperatures do not drop in the next 10 to 15 days, there will be consequences. This is the moment when significant volumes are are produced," said Rametta.

Currently, the price for artichokes is €0.50 each. "That's a good price, but we shouldn't be fooled by this indication, since it will change as soon as there is more supply".

"This year the balance between supply and demand could be influenced by the artichokes from Apulia and Tunisia, which are available on the market in the same period. Due to the warm weather the production in Sicily delayed by two weeks and this will lead to a concentration of supply that will have an impact on the market," said Rametta.

In short, the 2020/2021 season will be dominated by a good quality artichokes, despite the lack of rain. The warm weather will keep consumption low, and due to the slowdown in other growing areas, all crops will be available on the market at the same time, and many growers fear that this will reduce the commercial calendar.

This is why the artichoke remains a very appreciated reference
The artichoke has a sweet and particular taste and is consumed from November to June. The vegetable is highly digestible and has many nutritional properties; it is free of cholesterol and lipids, low in calories, high in fiber and rich in iron, zinc, copper, potassium, calcium and vitamins.