This year, South Africa exported ten percent more fruit than in 2019. That's despite - or thanks to - the COVID-19 crisis. Bad weather like storms also failed to prevent that country from exporting high volumes of fruit. Based on figures up to September, fresh fruit exports for the whole of 2020 are estimated at 3.6 million tons. Last year, the January-September figures accounted for 92% of the annual total. These statistics exclude Zambia. In 2019, exports to that country showed a strange deviation. 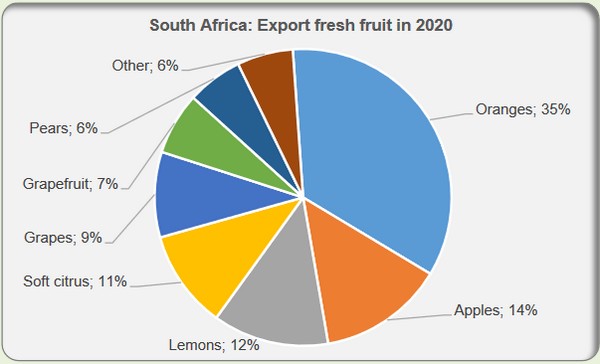 In 2020, the Netherlands imported 810,000 tons of fruit from South Africa. That's 23% of that country's total fruit exports. The EU27, as a whole, accounts for a third. Direct exports to Italy, Germany, and Spain fell. Direct exports to Portugal, however, rose sharply. The growth in exports to the EU27 was, therefore, "only" 16%. The United Kingdom is the second-largest buyer of South African fruit. With 425,000 tonnes, that's 15% more than in 2019. 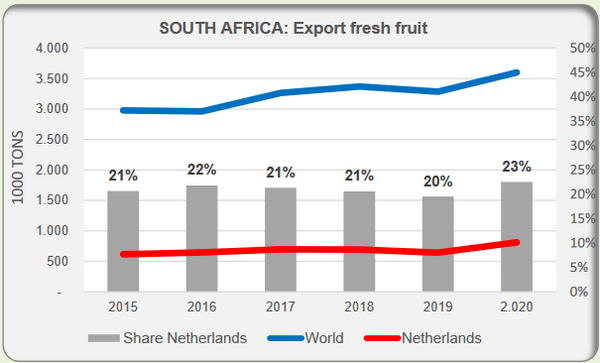 Exports to China halved this year
South Africa's fruit exports to South and East Asian countries plummeted this year. This is mainly due to exports to China. They dropped by a quarter to 155,000 tons. Exports to Hong Kong fell by 15%. Bangladesh and Malaysia are the third and fourth-largest Asian buyers. Their volumes - 126,000 tons and 84,000 tons, respectively - fell even more. However, sales to North America went well. These increased by 25% and 60% for Canada (112,000 tons) and the United States (93,000 tons).

A third are oranges
Oranges represent more than a third of South's Africa's fruit exports. This product's exports did increase but by just under six percent less than average. A total of 1.25 million tons of oranges were exported by South Africa this year. That's compared to 1.18 million tons in 2019. In 2018, that was 1.27 million tons more than this year. 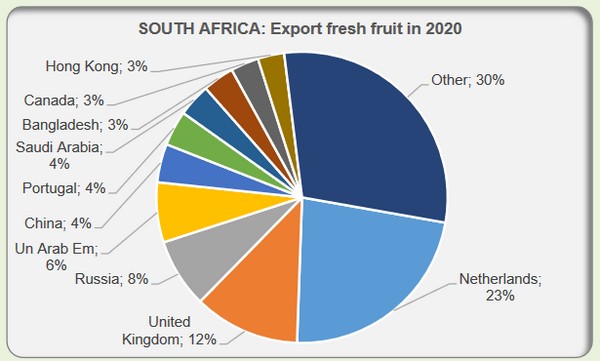 The Netherlands buys most of South Africa's exported oranges. This year that amounted to 283,000 tons, 23% of the total exports. Portugal takes the remarkable second place,  with 106,000 tons this year. That's 80% more than last year. Significantly fewer South African oranges went to China (-47%) and Saudi Arabia (-20%).

More melons and mandarins, in particular
Lagging far behind in second place for exported products is apples. This year, South Africa's apple exports grew by eight percent to just under 500,000 tons. This year's top climbers in the South African export range are lemons and mandarins. Thirty percent more of both products were exported than in 2019. The Netherlands, again, took far more lemons. Exports to that country doubled from 45,000 tons in 2019 to more than 90,000 tons this year.