In the third quarter of 2020, South Africa's primary agricultural employment improved by 1% from the previous quarter to 807,882. This slight quarterly recovery corresponds with the reopening of the economy and certain agricultural commodities during that period.

This is important because while the majority of agriculture remained operational since the start of the lockdown period, the sector could not entirely avoid job losses as demand for some products in the sector was somewhat disrupted. When compared to the corresponding period in 2019, employment in this sector was down by 8%.

In short, SA agricultural employment held up in Q3, but there are disparities across provinces. 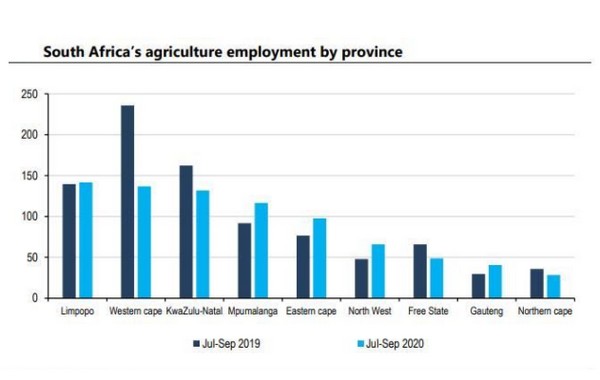 Dynamics from provincial level differ, as evidenced by the Eastern Cape, Gauteng, Mpumalanga and Limpopo where primary agricultural employment increased in the third quarter of this year compared with the same period in 2019.

The increased employment in these provinces can be attributed to increased activity in the fields as 2020 was a boom agriculture year in terms of output in almost all subsectors (horticulture, field crops and livestock).

Looking ahead, the agricultural sector is poised for another good year on the back of an expected La Niña. Bizcommunity.com reports that this means that there will be increased activity in the sector, which would sustain employment, at least at levels above 750,000.