As the son of a farmworker, Sewis van der Horst managed to work his way up to become a farmer in his own right and an exporter of quality fruit. Last year, he was crowned the Toyota New Harvest winner.

Sewis van der Horst believes the quality of the fruit produced on his farm, Loufontein, is comparable to that of any commercial producer, and adds that nothing about his fruit indicates he is an emerging farmer. Van der Horst grew up on a stone fruit farm in the Western Cape’s fertile Hoeko Valley.

“Agriculture is my passion, but I didn’t want to stay a farmworker for the rest of my life. I wanted to own a farm,” he says.

In 1993, the owners of the farm offered him the chance to attain a higher education, and he enrolled for an agricultural diploma at the Kromme Rhee Training Academy, just outside of Stellenbosch. 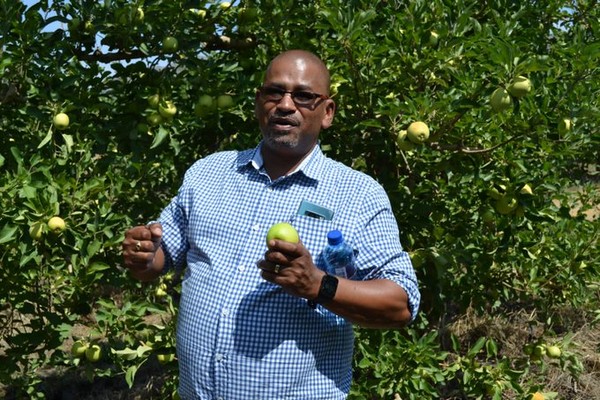 After completing his studies, he worked in various managerial positions. He then began applying to government for a land reform farm. After numerous attempts, he finally received a property from the then Department of Rural Development and Land Reform through the Proactive Land Acquisition Strategy. He was granted a 30-year lease, with the option of buying the land.

In 2016, Van der Horst took charge of the 1 165ha Loufontein just outside of Villiersdorp. When he received the farm, apples, pears and nectarines had already been planted on 30ha, 12ha and 1,27ha respectively. However, the orchards and the farm in general were not in very good condition.