Italian pears seemed to dominate the markets: Abate Fetel were the most popular with customers, Santa Maria was only of little interest locally. Williams Christ from Italy were there as well. In Frankfurt, Red Bartlett reappeared after a break, but they were too expensive for smooth processing. From Turkey came primarily Santa Maria and -more seldom- Deveci pears.

The presence of Dutch Gute Luise and Conference were limited. Domestic Alexander Lucas, Williams Christ, Boscs bottle pears and Conference were convincing in terms of quality. The sales options improved a little here and there. The demand could generally be met without difficulty. Therefore it was not surprising that the traders hardly had to modify their previous prices. 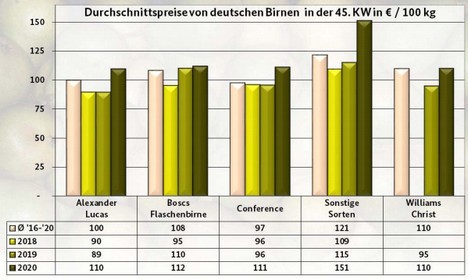 Apples
As usual at this time of the season, domestic batches were predominant. All in all, the fruit left nothing to be desired in terms of quality. Therefore, despite the recent lockdown, demand was nice in general.

Table grapes
Italy dominated the scene with many varieties: Italia, Crimson Seedless and Michele Palieri formed the basis of the product range. With the appearance of the first Brazilian and Peruvian products, the season of overseas articles began.

Small citrus fruits
Deliveries expanded continuously. All in all, the demand could be met without any difficulties. Here and there the distributors had to reduce their prices in order not to endanger sales.

Lemons
Due to the late summer weather, sales were sometimes a bit complicated, as people were rather reluctant to buy. In addition, there was a divergent quality.

Bananas
On the one hand, the level of supply harmonized sufficiently with the intensity of demand. On the other hand, the Corona situation increasingly irritated customers, who subsequently reduced the volume of orders due to a certain amount of uncertainty.

Cauliflower
Local deliveries apparently dominated the event. The demand was not very pronounced and could be met without difficulty. Prices mostly shifted downwards.

Lettuce
With regard to iceberg lettuce, only Spanish batches were generally available. Domestic supplies were rare and left more and organoleptic characteristics sometimes could be better.

Tomatoes
The assortment was wide, as several countries participated in the stores. Dutch and Belgian batches formed the basis of the range.

Sweet peppers
Spanish deliveries outweighed Dutch goods. The demand could be satisfied without any problems. The prices developed differently. In some places, there were complaints about the rather uneven quality of the fruits, which slowed down the turnover noticeably.