"Wild mushrooms saved us in this exceptional year"

The current Corona hit marketing year is slowly but surely coming to an end for the edible mushroom industry. The recently tightened regulations are also making extreme demands on this trade segment, while new sales markets and opportunities are opening up especially in these difficult times, says Uwe Buschhaus, an internationally active mushroom wholesaler based in Witten.

The current crisis has also hit the specialized group of companies hard. Buschhaus: "The supply of cash & cash markets has largely collapsed. In addition, there are no major events or Christmas markets. As a result, we have to reckon with a drop in mushroom sales of around 50 percent." 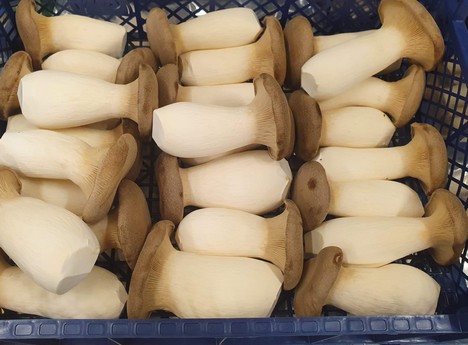 Positive response for German king trumpets
Despite the current crisis situation, the experienced major supplier is looking confidently to the future. Recently, the company has been able to continuously offer fresh herb sidelts from German cultivation. "We have found a reliable partner and now purchase a few tons each week, for three different ranges. The medium sized goods are most in demand, weighing about 70 to 100 grams per piece. The small-medium grading weighs about 30-70 grams. Finally, there are also mini king trumpets  with a unit weight of less than 30 grams.."

The demand for this 'new' product line tends to increase. According to Buschhaus, the domestic cultivation of king trumpets offers several advantages to the trade. "First of all, one has a continuous supply of high quality noble mushrooms of German origin. In addition, procurement from Korea tends to become more expensive, especially in these times when air freight capacity is limited due to Corona. It is not without reason that the product line has been well received not only by German food retail and wholesale markets, but also in neighboring countries such as Austria and Switzerland." 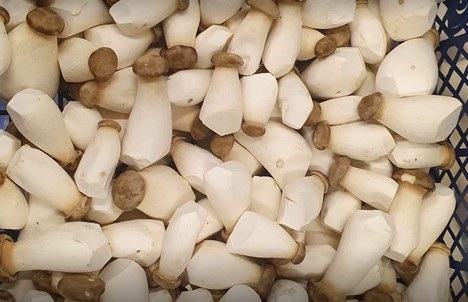 Since last year, Uwe Buschhaus has also been supplying some regional Rewe stores directly without intermediate trade. The purpose of this direct supply is to go for short transport routes, guaranteeing absolute freshness. 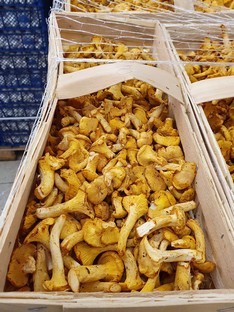 chanterelles are still arriving from Belarus. "This is quite unusual at this time of year, because normally we would have finished the campaign already in mid-October. The quality of the late produce is also surprisingly good, so as long as there are still some left we won't switch to Spanish and Portuguese produce."

Despite the Corona restrictions, Buschhaus generally looks back on a satisfactory forest mushroom season. "The flow of goods could be maintained continuously and the campaign was not significantly worse than usual. On the contrary: With forest mushrooms we were able to partially make up for the losses in spring. In this sense, these forest mushrooms saved us in this exceptional year." 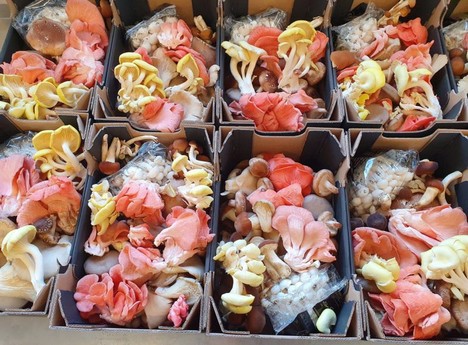 Supply of private customers
Similar to many colleagues in the wholesale sector, Buschhaus has also decided to supply private customers. Mainly households and small customers in the regional environment are supplied with fresh goods. "Relatively speaking, sales in this area are rather laborious. In this respect it is not a reasonable alternative for us wholesalers," Buschhaus explains. Despite the relatively low volume of goods purchased, the 'new' sales division is appreciated by the customer. "More than anything, our mushroom mix with up to 8 or 10 different mushroom varieties is getting more and more popular. We will soon also activate an online store for private buyers," Buschhaus concludes.