Next year, they'll use pheromones in nearly 10,000 hectares of citrus in the most affected areas

LA UNIÓ de Llauradors and the Ministry of Agriculture, Rural Development, Climate Emergency, and Ecological Transition have agreed to carry out a joint strategy for the sustainable fight against Delottococcus aberiae – South Africa's cotonet– next year through the distribution of pheromones for mass trapping in about 10,000 hectares of citrus in the most affected areas of the Valencian Community.

Thus, the Ministry complies with the request that this agrarian organization made in April of this year. To reduce the population of the plague, LA UNIÓN requested the ministry to purchase a pheromone of sexual attraction and natural pyrethrins to carry out a test in an affected area, and later on in a more representative growing area.

The product that LA UNIÓ wanted the Ministry to buy is made by a company from Valencia, which is based in the town of Carlet, and it effectively reduces the pest's male populations and, consequently, the damage.

The objective now is to distribute these pheromones throughout the first quarter of next year to reduce the population of Delottococcus aberiae for the next citrus season. 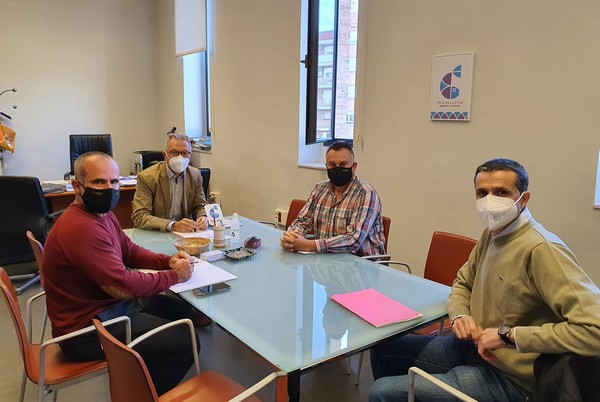 The measure was taken in a meeting that the general secretary of LA UNIÓ, Carles Peris, the head of the citrus sector, Jose Francisco Nebot, the regional secretary of Agriculture, Francisco Rodríguez Mulero, the general director of Agriculture, Roger Llanes, and the head of the Plant Health service, Vicente Dalmau, had this week. LA UNIÓ appreciates the willingness and goodwill of the Ministry to make this proposal possible, which is of great importance for the citrus sector of the Community of Valencia.

It should be noted that on April 16, the European Commission set an expiration date for phytosanitary products formulated with methyl-chlorpyrifos, the most effective tool so far to control the cotonet Delottococcus aberiae plague, known as cotonet from South Africa.